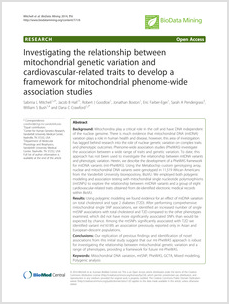 Mitochondria play a critical role in the cell and have DNA independent of the nuclear genome. There is much evidence that mitochondrial DNA (mtDNA) variation plays a role in human health and disease, however, this area of investigation has lagged behind research into the role of nuclear genetic variation on complex traits and phenotypic outcomes. Phenome-wide association studies (PheWAS) investigate the association between a wide range of traits and genetic variation. To date, this approach has not been used to investigate the relationship between mtDNA variants and phenotypic variation. Herein, we describe the development of a PheWAS framework for mtDNA variants (mt-PheWAS). Using the Metabochip custom genotyping array, nuclear and mitochondrial DNA variants were genotyped in 11,519 African Americans from the Vanderbilt University biorepository, BioVU. We employed both polygenic modeling and association testing with mitochondrial single nucleotide polymorphisms (mtSNPs) to explore the relationship between mtDNA variants and a group of eight cardiovascular-related traits obtained from de-identified electronic medical records within BioVU.Using polygenic modeling we found evidence for an effect of mtDNA variation on total cholesterol and type 2 diabetes (T2D). After performing comprehensive mitochondrial single SNP associations, we identified an increased number of single mtSNP associations with total cholesterol and T2D compared to the other phenotypes examined, which did not have more significantly associated SNPs than would be expected by chance. Among the mtSNPs significantly associated with T2D we identified variant mt16189, an association previously reported only in Asian and European-descent populations.Our replication of previous findings and identification of novel associations from this initial study suggest that our mt-PheWAS approach is robust for investigating the relationship between mitochondrial genetic variation and a range of phenotypes, providing a framework for future mt-PheWAS.