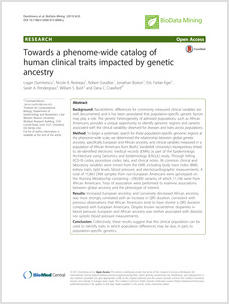 Racial/ethnic differences for commonly measured clinical variables are well documented, and it has been postulated that population-specific genetic factors may play a role. The genetic heterogeneity of admixed populations, such as African Americans, provides a unique opportunity to identify genomic regions and variants associated with the clinical variability observed for diseases and traits across populations.To begin a systematic search for these population-specific genomic regions at the phenome-wide scale, we determined the relationship between global genetic ancestry, specifically European and African ancestry, and clinical variables measured in a population of African Americans from BioVU, Vanderbilt University’s biorepository linked to de-identified electronic medical records (EMRs) as part of the Epidemiologic Architecture using Genomics and Epidemiology (EAGLE) study. Through billing (ICD-9) codes, procedure codes, labs, and clinical notes, 36 common clinical and laboratory variables were mined from the EMR, including body mass index (BMI), kidney traits, lipid levels, blood pressure, and electrocardiographic measurements. A total of 15,863 DNA samples from non-European Americans were genotyped on the Illumina Metabochip containing 200,000 variants, of which 11,166 were from African Americans. Tests of association were performed to examine associations between global ancestry and the phenotype of interest.Increased European ancestry, and conversely decreased African ancestry, was most strongly correlated with an increase in QRS duration, consistent with previous observations that African Americans tend to have shorter a QRS duration compared with European Americans. Despite known racial/ethnic disparities in blood pressure, European and African ancestry was neither associated with diastolic nor systolic blood pressure measurements.Collectively, these results suggest that this clinical population can be used to identify traits in which population differences may be due, in part, to population-specific genetics.