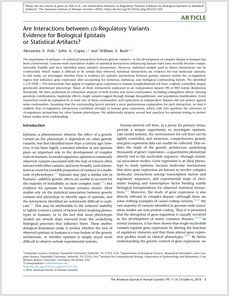 The importance of epistasis-or statistical interactions between genetic variants-to the development of complex disease in humans has been controversial. Genome-wide association studies of statistical interactions influencing human traits have recently become computationally feasible and have identified many putative interactions. However, statistical models used to detect interactions can be confounded, which makes it difficult to be certain that observed statistical interactions are evidence for true molecular epistasis. In this study, we investigate whether there is evidence for epistatic interactions between genetic variants within the cis-regulatory region that influence gene expression after accounting for technical, statistical, and biological confounding factors. We identified 1,119 (FDR 5%) interactions that appear to regulate gene expression in human lymphoblastoid cell lines, a tightly controlled, largely genetically determined phenotype. Many of these interactions replicated in an independent dataset (90 of 803 tested, Bonferroni threshold). We then performed an exhaustive analysis of both known and novel confounders, including ceiling/floor effects, missing genotype combinations, haplotype effects, single variants tagged through linkage disequilibrium, and population stratification. Every interaction could be explained by at least one of these confounders, and replication in independent datasets did not protect against some confounders. Assuming that the confounding factors provide a more parsimonious explanation for each interaction, we find it unlikely that cis-regulatory interactions contribute strongly to human gene expression, which calls into question the relevance of cis-regulatory interactions for other human phenotypes. We additionally propose several best practices for epistasis testing to protect future studies from confounding.