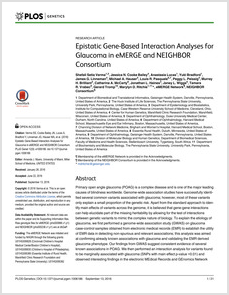 Primary open angle glaucoma (POAG) is a complex disease and is one of the major leading causes of blindness worldwide. Genome-wide association studies have successfully identified several common variants associated with glaucoma; however, most of these variants only explain a small proportion of the genetic risk. Apart from the standard approach to identify main effects of variants across the genome, it is believed that gene-gene interactions can help elucidate part of the missing heritability by allowing for the test of interactions between genetic variants to mimic the complex nature of biology. To explain the etiology of glaucoma, we first performed a genome-wide association study (GWAS) on glaucoma case-control samples obtained from electronic medical records (EMR) to establish the utility of EMR data in detecting non-spurious and relevant associations; this analysis was aimed at confirming already known associations with glaucoma and validating the EMR derived glaucoma phenotype. Our findings from GWAS suggest consistent evidence of several known associations in POAG. We then performed an interaction analysis for variants found to be marginally associated with glaucoma (SNPs with main effect p-value 0.01) and observed interesting findings in the electronic MEdical Records and GEnomics Network (eMERGE) network dataset. Genes from the top epistatic interactions from eMERGE data (Likelihood Ratio Test i.e. LRT p-value 1e-05) were then tested for replication in the NEIGHBOR consortium dataset. To replicate our findings, we performed a gene-based SNP-SNP interaction analysis in NEIGHBOR and observed significant gene-gene interactions (p-value 0.001) among the top 17 gene-gene models identified in the discovery phase. Variants from gene-gene interaction analysis that we found to be associated with POAG explain 3.5% of additional genetic variance in eMERGE dataset above what is explained by the SNPs in genes that are replicated from previous GWAS studies (which was only 2.1% variance explained in eMERGE dataset); in the NEIGHBOR dataset, adding replicated SNPs from gene-gene interaction analysis explain 3.4% of total variance whereas GWAS SNPs alone explain only 2.8% of variance. Exploring gene-gene interactions may provide additional insights into many complex traits when explored in properly designed and powered association studies.