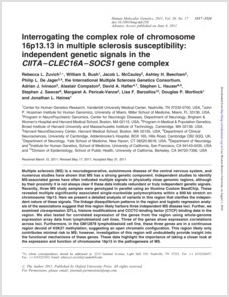 Multiple sclerosis (MS) is a neurodegenerative, autoimmune disease of the central nervous system, and numerous studies have shown that MS has a strong genetic component. Independent studies to identify MS-associated genes have often indicated multiple signals in physically close genomic regions, although by their proximity it is not always clear if these data indicate redundant or truly independent genetic signals. Recently, three MS study samples were genotyped in parallel using an Illumina Custom BeadChip. These revealed multiple significantly associated single-nucleotide polymorphisms within a 600 kb stretch on chromosome 16p13. Here we present a detailed analysis of variants in this region that clarifies the independent nature of these signals. The linkage disequilibrium patterns in the region and logistic regression analysis of the associations suggest that this region likely harbors three independent MS disease loci. Further, we examined cis-expression QTLs, histone modifications and CCCTC-binding factor (CTCF) binding data in the region. We also tested for correlated expression of the genes from the region using whole-genome expression array data from lymphoblastoid cell lines. Three of the genes show expression correlations across loci. Furthermore, in the GM12878 lymphoblastoid cell line, these three genes are in a continuous region devoid of H3K27 methylation, suggesting an open chromatin configuration. This region likely only contributes minimal risk to MS; however, investigation of this region will undoubtedly provide insight into the functional mechanisms of these genes. These data highlight the importance of taking a closer look at the expression and function of chromosome 16p13 in the pathogenesis of MS.