The Pacific Symposium on Biocomputing is a unique mid-sized conference focused on computational methods with applications to the biomedical sciences.  Hosted in Hawaii (Figures 1 and 2), PSB has been around since 1996, and many attendees have been to every single meeting.  I had not heard of PSB until I met Dr. Marylyn Ritchie and her lab.  My first conference was the American Society of Human Genetics in San Francisco back in 1996. Since then, I have become accustomed to the rhythm of abstract submissions in June followed by poster/oral presentation assignments in August with a frantic sprint towards early bird registration and travel arrangements for the October or November meeting.  Soon after meeting Marylyn, I noticed her lab was busy in July writing papers for submission to PSB.  Students would squeal with glee when his or her paper was accepted for the proceedings in the fall.  The real kicker was the beginning of January when most of us trudged to the office or class in the cold while Marylyn’s lab was in Hawaii presenting their work at PSB. 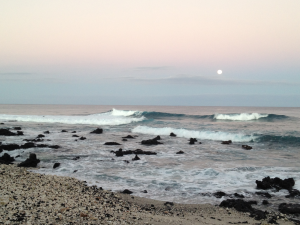 Figure 1. Sunrise on the Big Island. It’s so beautiful, the moon doesn’t want to leave. January 2015.

After a few cycles of PSB passed me by, I decided to try to submit to this mysterious and exotic meeting.  Since 2012, my lab has tried its luck in submitting manuscripts for peer review and acceptance into the proceedings.  I am proud to exclaim that this year three manuscripts from the lab have been accepted for the proceedings!  Congratulations to Dr. Logan Dumitrescu on her accepted manuscript for LPA common variants and myocardial infarction in African Americans!  Double congratulations goes to Dr. Jessica Cooke Bailey for her accepted manuscript and oral presentation on kidney-associated variants in NHANES!  Finally, a special congratulations goes to summer student Sarah Laper for her manuscript on the genetic basis of response to anti-hypertensives and statins in African Americans.  Like Jessica, Sarah earned a published AND an oral presentation.  Not bad for your first trainee, Dr. Nicole Restrepo!

The final revisions are due soon to PSB, so there’s still a lot of work to do!  But, it’s worth it.  It’s worth the aloha!

Posted in Crawford Crew and tagged Pacific Symposium on Biocomputing.