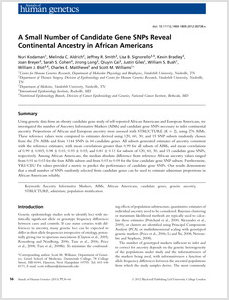 Using genetic data from an obesity candidate gene study of self-reported African Americans and European Americans, we investigated the number of Ancestry Informative Markers (AIMs) and candidate gene SNPs necessary to infer continental ancestry. Proportions of African and European ancestry were assessed with STRUCTURE (K 2), using 276 AIMs. These reference values were compared to estimates derived using 120, 60, 30, and 15 SNP subsets randomly chosen from the 276 AIMs and from 1144 SNPs in 44 candidate genes. All subsets generated estimates of ancestry consistent with the reference estimates, with mean correlations greater than 0.99 for all subsets of AIMs, and mean correlations of 0.99 0.003; 0.98 0.01; 0.93 0.03; and 0.81 0.11 for subsets of 120, 60, 30, and 15 candidate gene SNPs, respectively. Among African Americans, the median absolute difference from reference African ancestry values ranged from 0.01 to 0.03 for the four AIMs subsets and from 0.03 to 0.09 for the four candidate gene SNP subsets. Furthermore, YRI/CEU Fst values provided a metric to predict the performance of candidate gene SNPs. Our results demonstrate that a small number of SNPs randomly selected from candidate genes can be used to estimate admixture proportions in African Americans reliably.