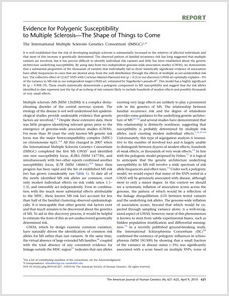 It is well established that the risk of developing multiple sclerosis is substantially increased in the relatives of affected individuals and that most of this increase is genetically determined. The observed pattern of familial recurrence risk has long suggested that multiple variants are involved, but it has proven difficult to identify individual risk variants and little has been established about the genetic architecture underlying susceptibility. By using data from two independent genome-wide association studies (GWAS), we demonstrate that a substantial proportion of the thousands of variants that individually fail to show statistically significant evidence of association have allele frequencies in cases that are skewed away from the null distribution through the effects of multiple as-yet-unidentified risk loci. The collective effect of 12,627 SNPs with Cochran-Mantel-Haenszel test (p 0.2) in our discovery GWAS set optimally explains approximately 3% of the variance in MS risk in our independent target GWAS set, estimated by Nagelkerke’s pseudo-R(2). This model has a highly significant fit (p 9.90E-19). These results statistically demonstrate a polygenic component to MS susceptibility and suggest that the risk alleles identified to date represent just the tip of an iceberg of risk variants likely to include hundreds of modest effects and possibly thousands of very small effects.
Posted in Publications, Will Bush and tagged Case-Control Studies, Cohort Studies, Genetic Predisposition to Disease, Genome, Human, Genome-Wide Association Study, Humans, Multifactorial Inheritance, Multiple Sclerosis, Polymorphism, Single Nucleotide, Randomized Controlled Trials as Topic.