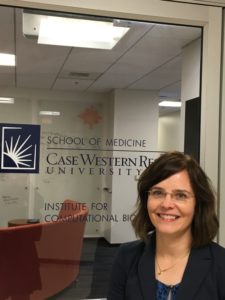 It’s the end of another semester, and in this case, another academic year.  This past semester, I taught EPBI 444 Communicating in Population Health Science Research and co-organized EPBI 502 Seminar in Genetic Epidemiology and Bioinformatics.  I don’t mind teaching all by myself, but it’s certainly more fun with friends! 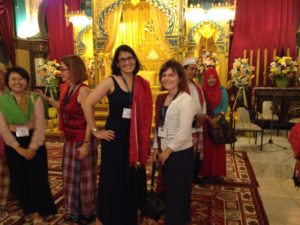 Figure 2. Drs. Dana Crawford and Cara Carty at the Maimoon Palace in Medan Indonesia for the Kavli Frontiers in Science Indonesian-American Symposium (2014).

This past semester, I was fortunate to have friends visit for a guest lecture or a talk in our seminar series.  Our first guest was Dr. Cara Carty, Assistant Professor of Pediatrics, Epidemiology and Biostatistics, George Washington University and a biostatistician at Children’s National Medical Center in Washington, DC (Figure 1).  I hadn’t seen Cara since the Kavli Frontiers in Science Indonesian-American Symposium in Medan, Indonesia back in 2014 (Figure 2).  I first met Cara when she was a post-doctoral fellow at the Fred Hutchison Cancer Research Center in Seattle, WA.  Cara was a member of the Women’s Health Initiative (WHI), a study site of the Population Architecture using Genomics and Epidemiology (PAGE) I study.  As PI of the Epidemiologic Architecture for Genes Linked to Environment (EAGLE), we were also a study site of the PAGE I study, and we collaborated extensively with Cara and other PAGE I investigators on characterizing common genetic variants associated with common diseases and traits such as lipids (PMC3895337, PMC3796061, PMC3669109, PMC3605054), inflammation (PMC104750), reproductive timing (PMC3657124 and PMC3570525), and colorectal cancer (PMC3918490) in diverse populations.  Cara is still involved with PAGE, now in its second funding cycle, and with WHI.  Cara, in fact, gave a great presentation on February 3, 2016 titled “Epigenetics of Aging in the Women’s Health Initiative” as part of EPBI 502 highlighting her more recent work in WHI.  While she was visiting, Cara met with our faculty here in the Department of Epidemiology and Biostatistics and reunited with Drs. Will Bush and Fred Schumacher, also PAGE I investigators (from EAGLE and the Multiethnic Cohort or MEC, respectively).  We are so glad that Cara came to visit us here in Cleveland in the dead of winter, and we look forward to seeing her again soon! 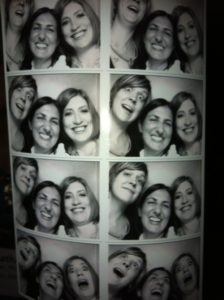 Figure 3. Drs. Sarah Pendergrass, Dana Crawford, and Marylyn Ritchie having a good time at the Illumina party in Washington, DC for ASHG (2010).

February was a busy month for hosting invited speakers.  After Cara, I hosted Dr. Sarah Pendergrass, Investigator I (Assistant Professor) from Geisinger Health System. Sarah and I go way back to 2009 when she was a post-doctoral fellow co-mentored by Dr. Marylyn Ritchie and myself (Figure 3). During that time and since then, Sarah has built a research program and reputation around the development of tools to visualize complex data. I invited her to co-lecture in EPBI 444 with Dr. Will Bush on the importance of telling a scientific story using figures and other visual aids for presentations and manuscripts (Figures 4 and 5). The lectures were packed with useful tips and personal stories of oral presentations gone bad. We could have gone on for hours! At the end of the day, both Sarah and Will generously shared their presentations with the students and offered to review draft slides being prepared for the class presentations later in the semester. I hope everyone was listening because from now on, there’s no excuse for text-heavy slides! Sarah is located only few hours away by car, so here’s hoping this is an annual event! 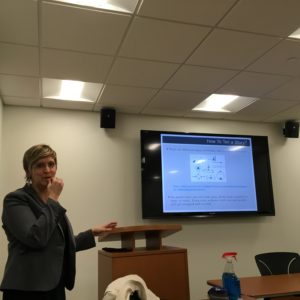 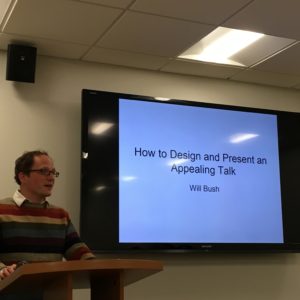 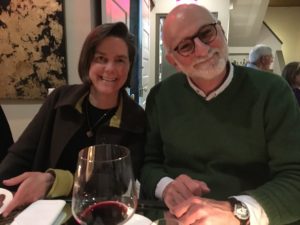 In March we hosted good friend and collaborator Dr. Melinda Aldrich, Assistant Professor in the Department of Thoracic Survey at Vanderbilt University Medical Center.  Melinda is an epidemiologist and her research interests are focused on identifying genetic and environmental risk factors for lung cancer and other pulmonary diseases in diverse populations.  Melinda gave a great lecture on March 2, 2016 for EPBI 502 titled “Scientific Advantages of Studies in Admixed Populations” when she described her past and on-going work in African American participants and patients from the Southern Community Cohort Study and BioVU, respectively.  Melinda’s three-day visit included a lot of food and good conversation (Figure 6).  Melinda re-connected with several of her past lives, including catching up with fellow Berkeley alum Dr. Farren Briggs and the former Center for Human Genetic Research (CHGR) crew (Dana Crawford, Will Bush, Chun Li, Jonathan Haines, and Scott Williams; Figure 7). Melinda and I still co-mentor a graduate student (Brittany Hollister), and she has several brewing collaborations with myself and others here at CWRU that will be sure to draw her back to CLE in the very near future for another visit! 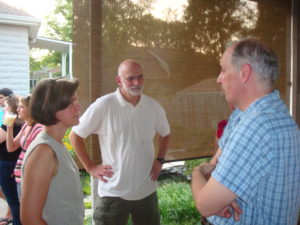 Figure 7. Drs. Melinda Aldrich, Scott Williams, and Jonathan Haines chatting in my backyard on what must have been the hottest night ever in Nashville, TN (July 2011).

Our final invited speaker of the semester for EPBI 502 was Dr. Stephen Turner, Assistant Professor of Public Health and Director of the Bioinformatics Core at the University of Virginia.  Stephen and I go way back to my first gig as Assistant Professor (Figure 8) where he was a graduate student looking for a lab Figure 9).  Stephen ended up joining the laboratory of Dr. Marylyn Ritchie and is one of a long line of Ritchie graduates and her graduates’ graduates (Figure 10).  Stephen has kept up with many of us, especially with Will Bush, co-founder of Stephen’s popular blog Getting Genetics Done.  Stephen visited us here at CWRU on March 23, 2016 and lectured on “Bioinformatics-as-a-Service: The Evolving Role of the Bioinformatics Core in Contemporary Biomedical Research” (Figure 11).  Turnout for Stephen’s talk was great, and we even attracted an audience outside of the department (thanks The Daily!).  During his visit, Stephen of course made the rounds and met with faculty in the department (Figure 12) as well as with our Computational Biology Core Director Dr. Ricky Chan. I heard talk of giving CWRU workshops on bioinformatics services, so here’s hoping we see Stephen again soon! 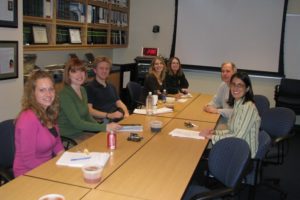 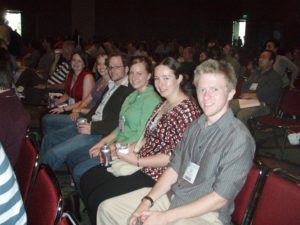 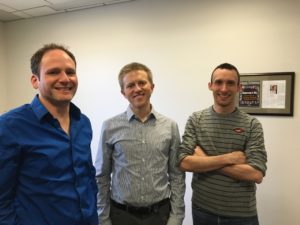 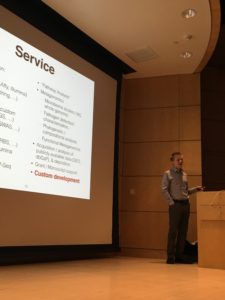 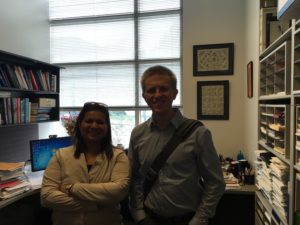 Figure 12. Drs. Sudha Iyengar and Stephen Turner having a chat in the CWRU Department of Epidemiology and Biostatistics (March 2016)

A special end-of-the semester shout-out goes to Dr. Kristy Miskimen.  Kristy is senior research associate in the laboratory of Dr. Jonathan Haines (Figure 13).  Kristy went above and beyond her lab duties in helping us organize the EPBI 502 journal clubs that were held the weeks when we did not have an invited seminar speaker.  Kristy was especially instrumental in organizing the journal clubs around CRISPR/Cas9 (Figure 14) and the NEJM “data parasites” editorial.  I truly appreciate Kristy’s enthusiasm and energy and hope she can bring it again as we plan for another round of journal clubs for the 2016-2017 academic year! 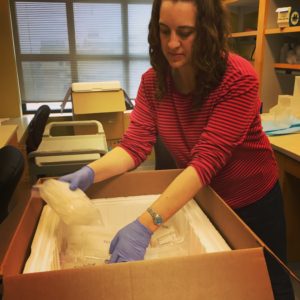 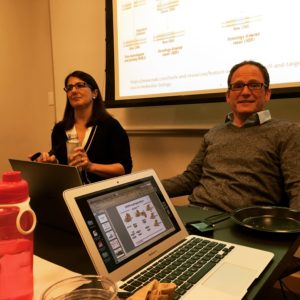 Figure 14. Drs. Dana Crawford and Will Bush discuss the many implications of CRISPR/Cas9 technology in EPBI 502 journal club (January 20, 2016). Dr. Kristy Miskimen’s computer and slides on the technology are in the foreground.