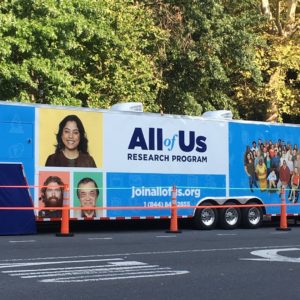 It’s official—the All of Us Research Program launched on May 6, 2018.  For those of you unfamiliar with the All of Us Research Program, formerly known as the Precision Medicine Initiative Cohort Program, it is an ambitious effort to recruit at least one million participants in the the United States for precision medicine research.  Recruitment efforts will focus on diversity, broadly defined as race/ethnicity, socioeconomic status, sexual orientation, and age.  Participants will be asked to donate biospecimens and data on health, lifestyle, exposures, and behaviors.  The program will use a variety of data collection methods, including tried-and-true surveys as well as emerging technologies such as wearables (think Fitbits) and electronic health records.

The All of Us Research Program is one of several programs under the Precision Medicine Initiative umbrella announced by the previous administration during the State of the Union address in January 2015 (PMID:26122056).  Following that January 2015 announcement was an infusion of $215 million to the National Institutes of Health’s (NIH) fiscal year 2016 budget.  The first “shovel ready” precision medicine projects were in cancer (PMC5101938), and the National Cancer Institute (NCI) seized the opportunity to expand clinical trials of tumor profiling and genomically-guided therapies for several cancers.  Sub-study data from these clinical trials has already been released, and the preliminary data are promising.

Soon after the final report was delivered, NIH released a series of funding opportunities to support cohort activities such as communication, direct volunteer pilot studies, biobanking, healthcare provider organization enrollment, regional medical care enrollment, and participant engagement.  All of these, including a coordinating center, have been awarded as of the end of 2017.  Pilot ascertainment studies began in June 2017, but fewer participants were enrolled by the end of the year than projected signalling a delay in the official launch of the program (PMID:28883052).  These delays have drawn criticism for the program, with some cautioning that the recruitment goals are too ambitious and the costs are too high. 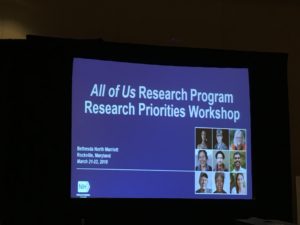 Despite these criticisms, the All of Us Program forged ahead.  Approximately six weeks prior to launch, the All of Us Program hosted Research Priorities Workshop March 21-23, 2018.  The workshop attendees included investigators affiliated and unaffiliated with All of Us across a spectrum of science as well as participants already enrolled in the program.  Through this three-day workshop, the program requested and received input on data collection (what to collect and how to collect) and research priorities.  All input was recorded and is being analyzed to identify high-priority use cases and potential protocol elements for future versions developed for the cohort.

NIH and All of Us investigators anticipate high enrollment rates and rapid accrual of data, and a recent NIH survey in August 2016 suggests that, yes, this might be possible (PMC4988644).  The population-based survey of almost 5,000 adults demonstrated high support for the cohort among those surveyed.  While enthusiasm did not differ much by race/ethnicity, it is important to note that increasing levels of education and younger age were independently associated with willingness to participate.  Also, compared with non-Hispanic whites, Hispanics were significantly more enthusiastic about the cohort program.  Note, however, that this survey was conducted pre-2016.  It is unclear if attitudes and trust in government-sponsored research programs have significantly changed over the last year and a half.  Furthermore, the Facebook Cambridge Analytica scandal and the Golden State Killer case (PMID:29880677) prominently preceded the official launch of cohort, leaving some to speculate that these events among others may have a negative impact on research that relies on combining big data with genomics. 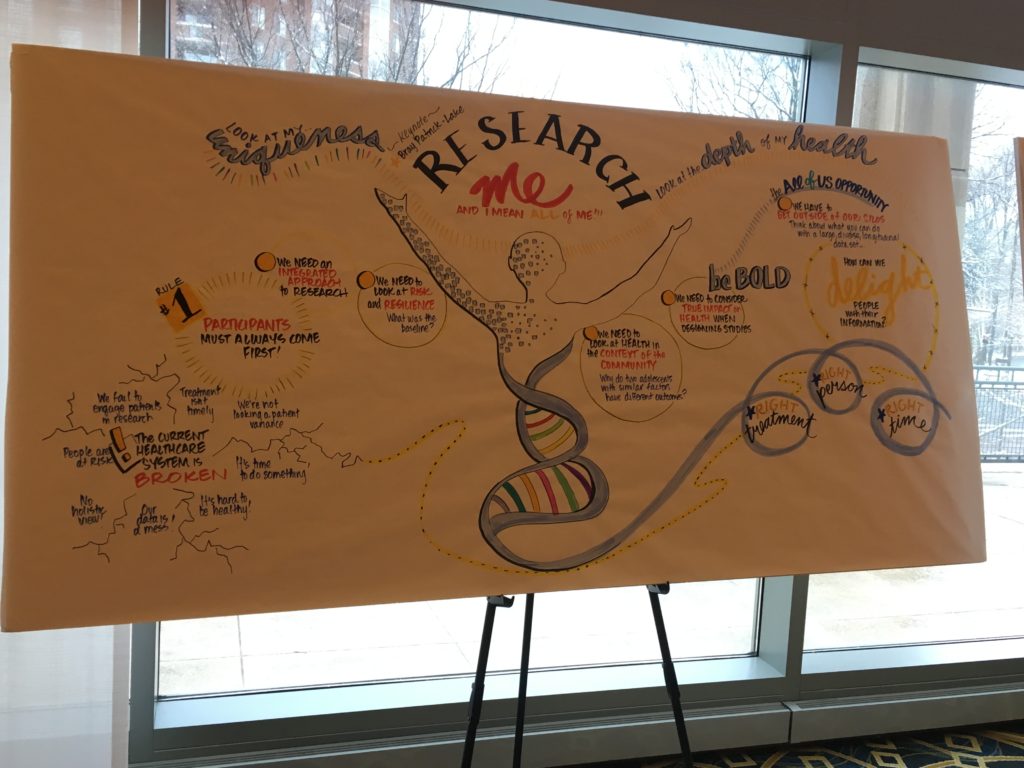 Regardless of recent events, we (PMID:29949895) and others have also noted that expressing support for a cohort or expressing willingness to participate in a cohort may not translate to actually signing up and contributing personal data and bodily fluids on a continuous basis.  Actual participation in an intensive and intimate study such as the proposed cohort may hinge on several practical factors, including availability (e.g., time off from work; free time in general), transportation, child care, and internet access, among other factors associated with burden.  Education and familiarity with technology may also be an important factor.  Much of the consenting process will be performed electronically, particularly for the direct volunteers.  Data collection will be app-driven.  As an example, Sync for Science was designed to enable sharing of electronic health records between participants and researchers.  Whether this and other recruitment and data collection strategies help All of Us reach its ascertainment goals remains to be seen.

Posted in Symposium and tagged All of Us, Diversity, Participation, Precision Medicine Initiative, Recruitment.