The Great Lakes Brewing Company, located in Ohio City, is a very popular local pub. The brewery is apparently the first microbrewery in Cleveland (established in 1988). Since then, its popularity has spilled over to other neighboring states where they now regularly distribute their brew. Great Lakes is also receiving national attention---so much so, its exterior is routinely shown in the TV Land series Hot in Cleveland.

If you find yourself in Ohio City and are looking for a causal bite to eat and some good beer, this place is worth a look. The food is what you might expect from a brewpub:   it’s good, solid, and probably not healthy. While the food might not be special, the atmosphere certainly is as the interior is the result of a merger of three Victorian-era buildings. The interior is more than old---it has some “Untouchables” history including bullet holes attributed to Eliot Ness.

The brewery offers a variety of brews including year round brews such as the Commodore Perry IPA (we like a good IPA!), the Burning River Pale Ale, the Eliot Ness Amber Lager, the Dortmunder Gold Lager, and the Edmund Fitzgerald Porter. Seasonal beers include, of course, the Christmas Ale and Oktoberfest. There is sure to be a brew to fit your taste and wet your whistle. I know if we’re in Ohio City on a lazy afternoon, we’ll be sure to pop by and grab a table for a sampler (Figure). 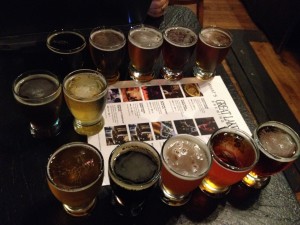