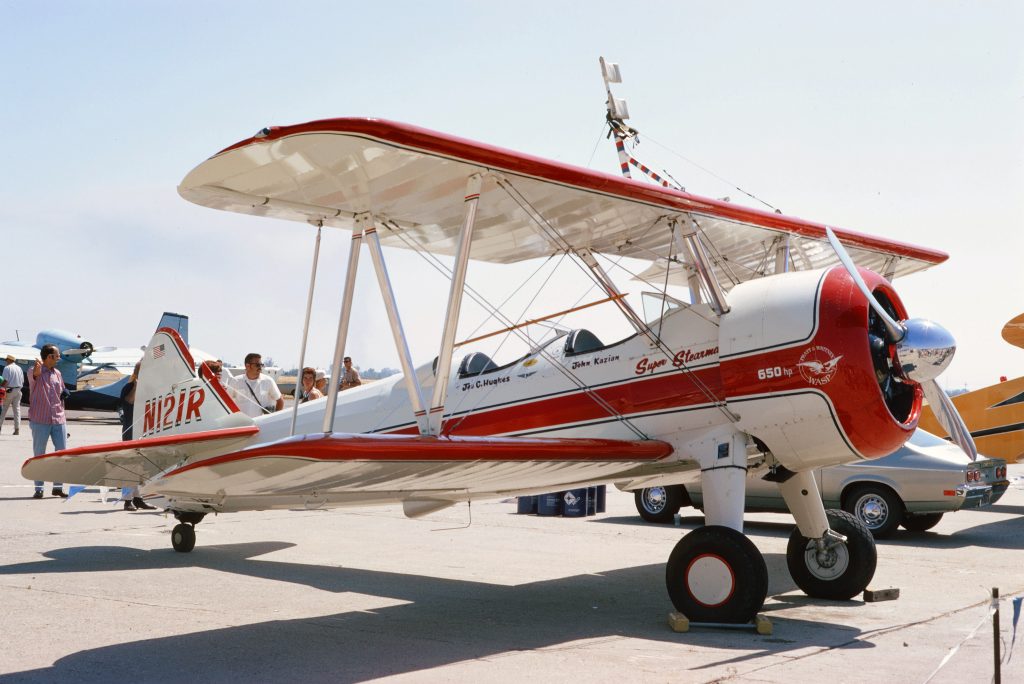 The signs of the new academic year are all around us.  Students are moving into dorms on campus.  There’s been a run on the school supply aisles at Target.  The Canadian geese and  US Navy Blue Angels are starting to fly in formation overhead.

Every Labor Day weekend since 1964, the Burke Lakefront Airport hosts the Cleveland National Air Show.  Consequently, every year the week leading up to Labor Day, we hear and see either the Blue Angels or the Thunderbirds practicing their moves for the big weekend. 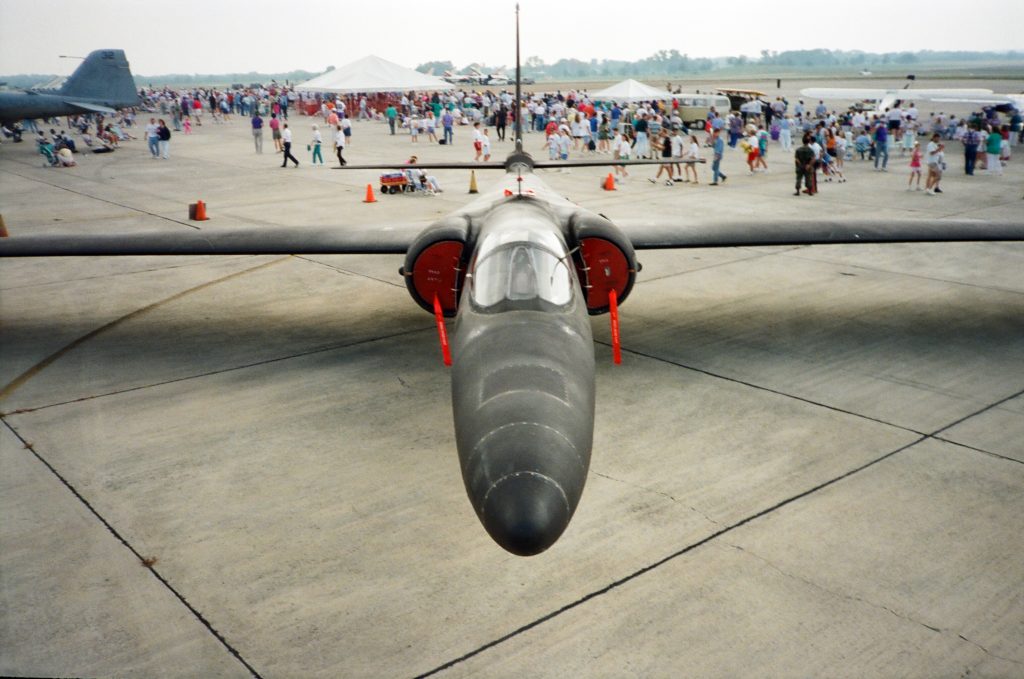 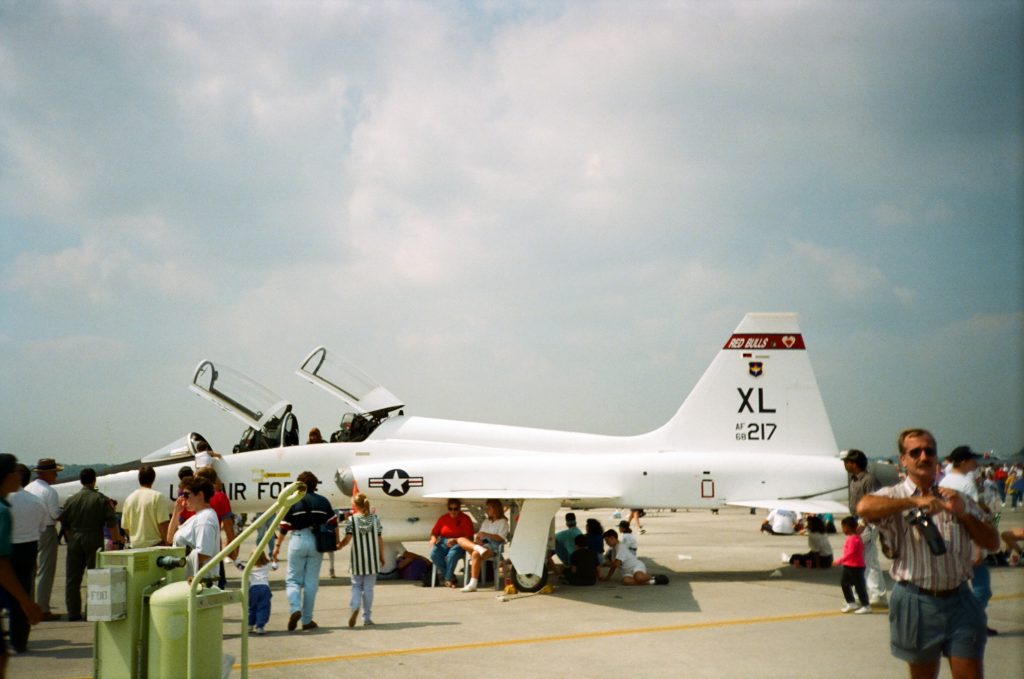 I think this is an Air Force Northrop T-38 Talon at the Great Tennessee Air Show in Smyrna, TN (1993).

Not too familiar with air shows?  You’re in luck–I can tell you all about them as I have been to a few in my day. 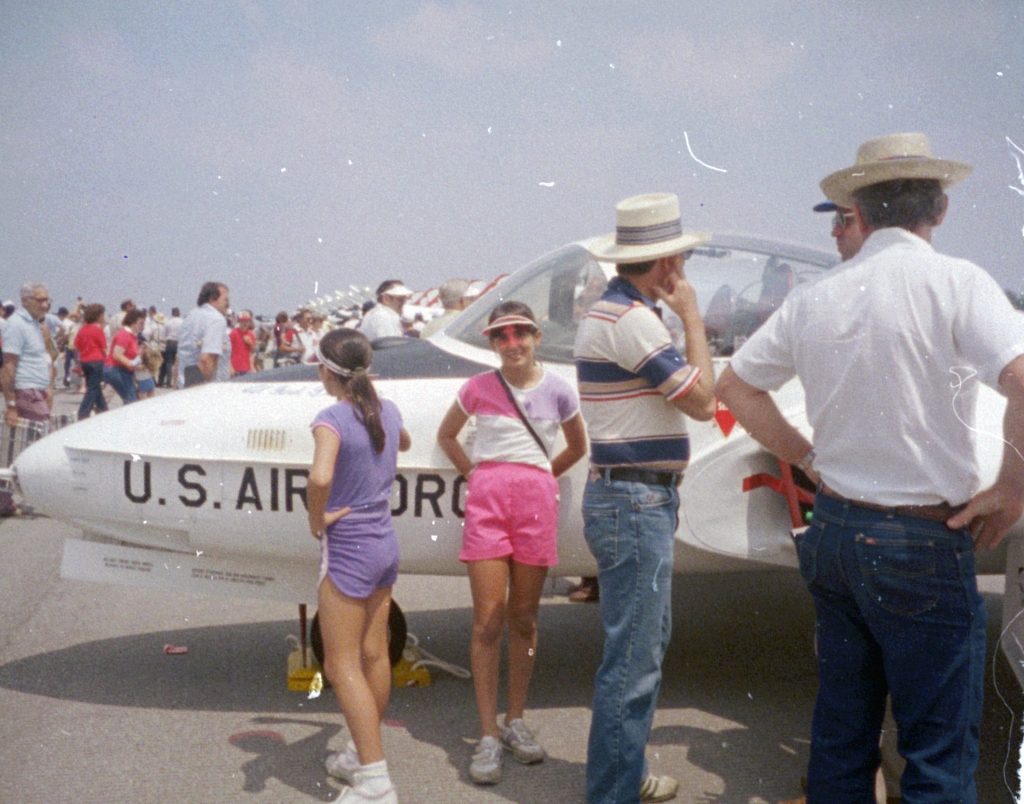 Hanging out with my sister in front of the Northrop T-38 Talon at the 1984 Dayton International Airshow & Trade Exhibition. 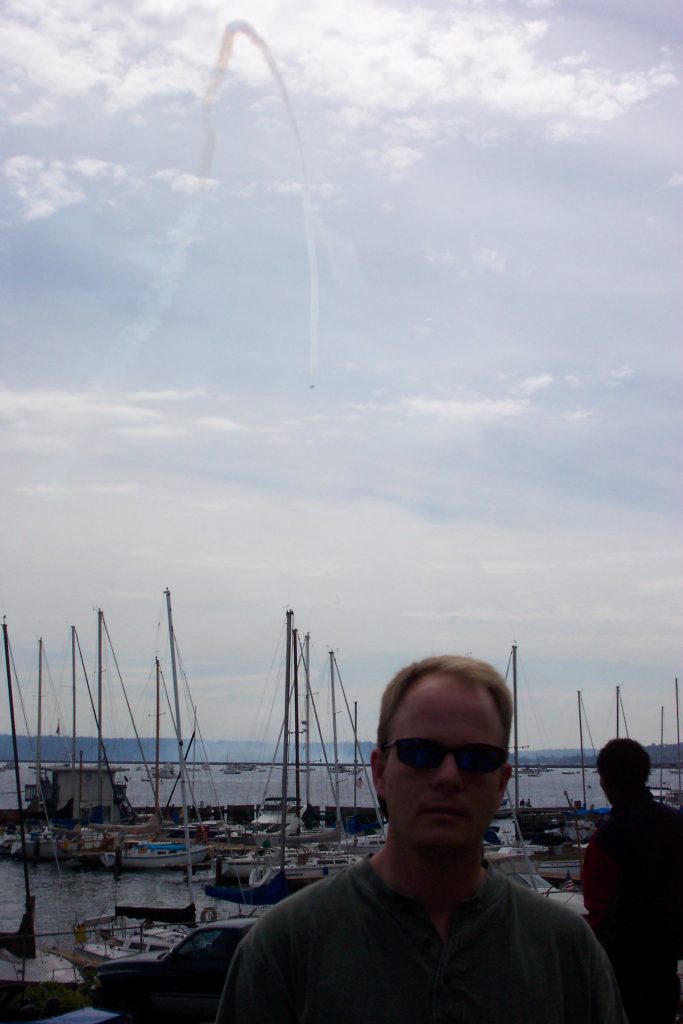 Dragging the hubby to the Boeing Air Show at Seafair Weekend, Seattle, WA (2003).

Air shows in the United States have been around for more than 100 years.  The first air show popped up in 1910 in Los Angeles, California, soon after the Dayton, Ohio Wright brothers achieved sustained flight in a man-made airplane for the first time ever in 1903.  Ever since, summertime has been air show season and a staple for many local airports. 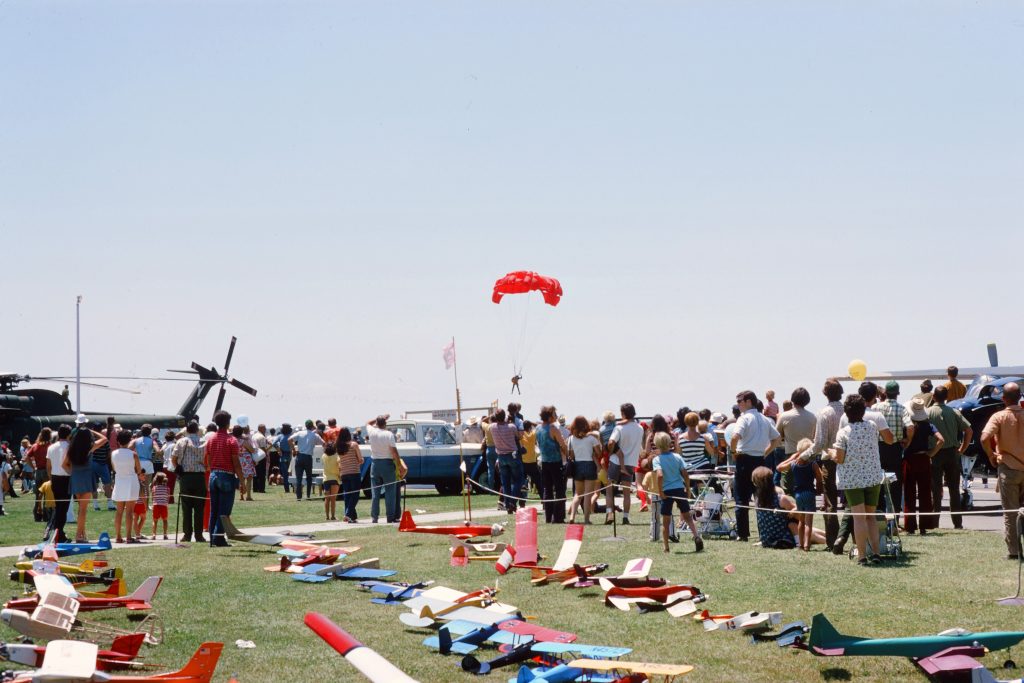 A typical air show consists of both on the ground and air activities.  Like a car show, air shows feature parked birds fun for the whole family to check out.  Some even let you sit in the cockpit! 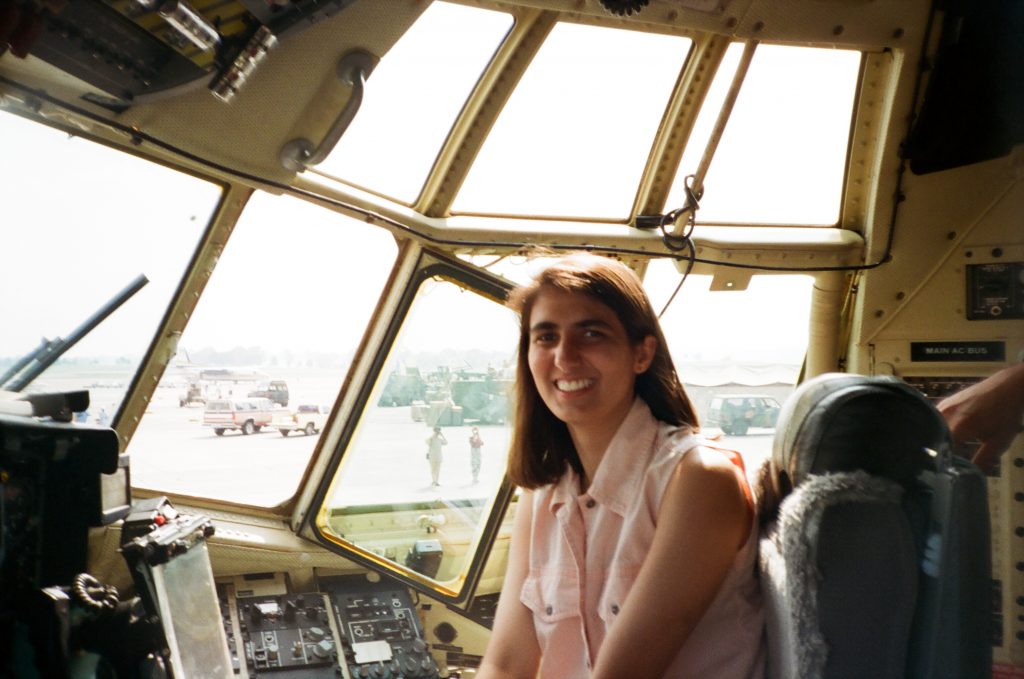 The air activities vary from air show to air show, but some of the elements seem to be consistent, and all seem to elicit what I’ll call the Underdog reaction. 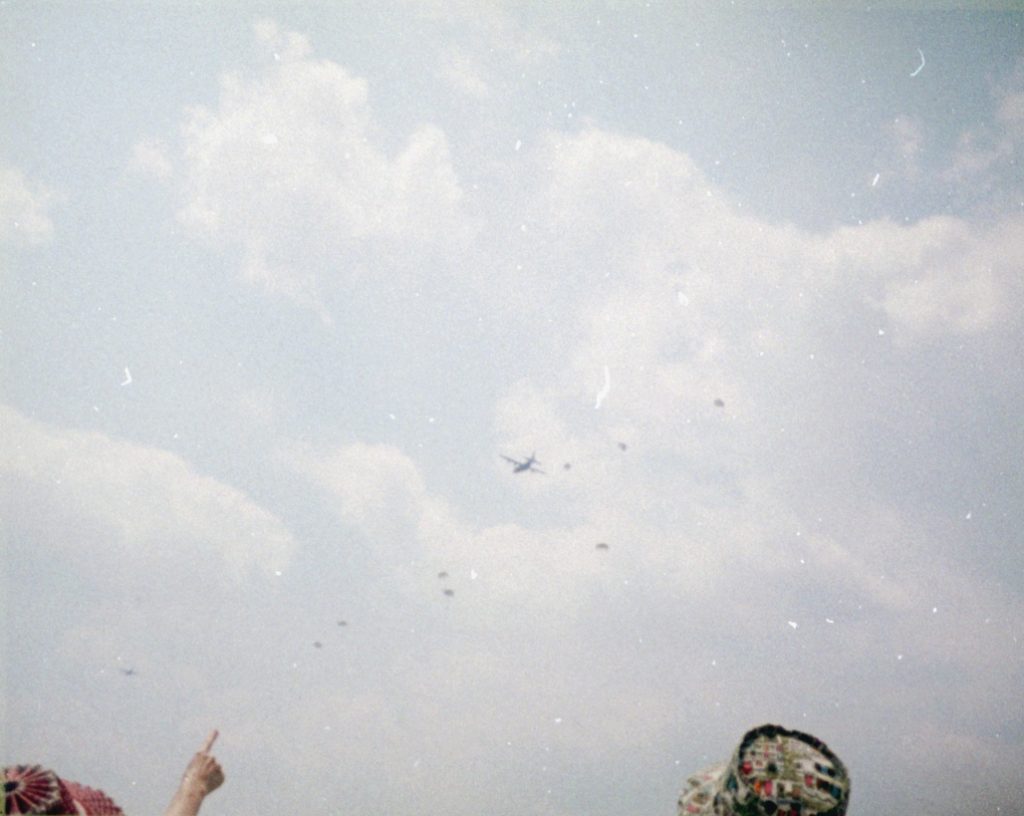 The Underdog reaction at air shows.  That is, there’s a lot of pointing at the sky.  And, no, these are not frogs at the Dayton International Airshow & Trade Exhibition (1984).

More specifically, there’s usually some stunt flying and some parachuting.  Stunt flying takes many forms.  There are the crazy wing-walkers where literally one of the passengers climbs out from their comfortable seat and straps themselves to the wing or other parts of the plane that do not have proper seats.  Last year’s Cleveland National Air Show featured Greg and Ashley Shelton, where Ashley shows us how this wing-walking thing is done. 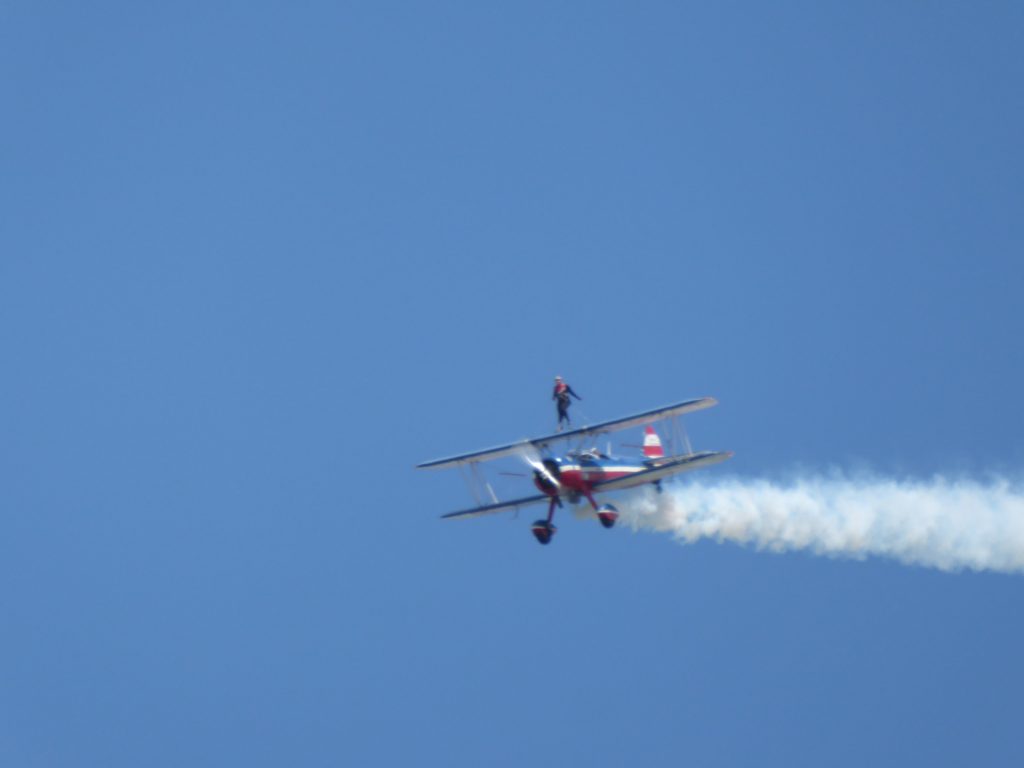 Greg and Ashley Shelton. Greg pilots the Stearman and Ashley shows that her boots were made for walking all over this wing. Cleveland National Air Show (2018).

Other stunt flying could involve what I would call Snoopy’s World War I Sopwith Camel fighter bi-plane.  Sometimes air shows feature these classic planes by themselves doing cool loop-d-loops through smoke rings or executing difficult aerobatic moves like hammerhead turns (stall turns).  Others feature two or more planes chasing each other, a sort of Red Baron versus Snoopy or a dogfight. 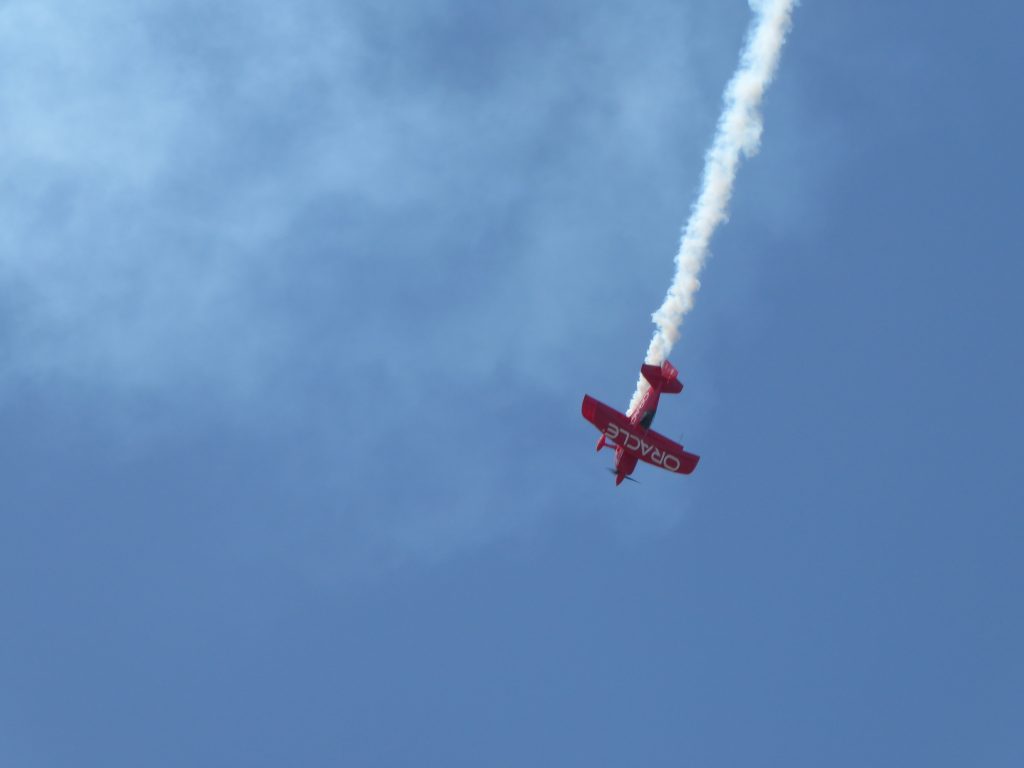 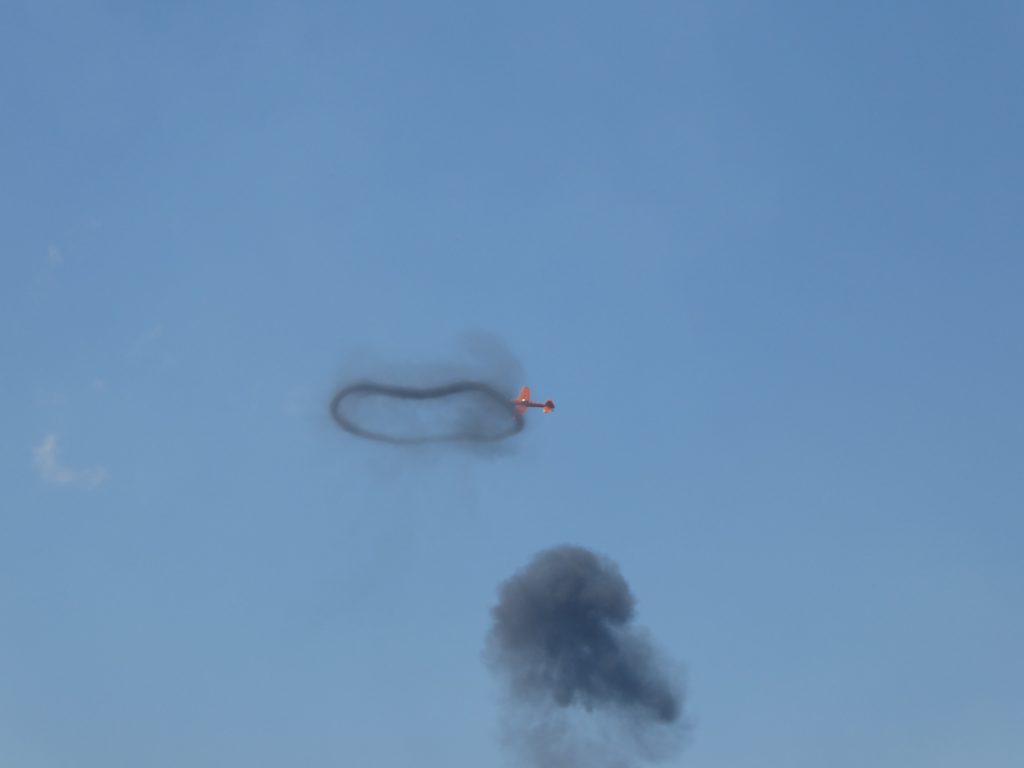 Whee! Loop-d-loops through rings of smoke at the Cleveland National Air Show (2018). 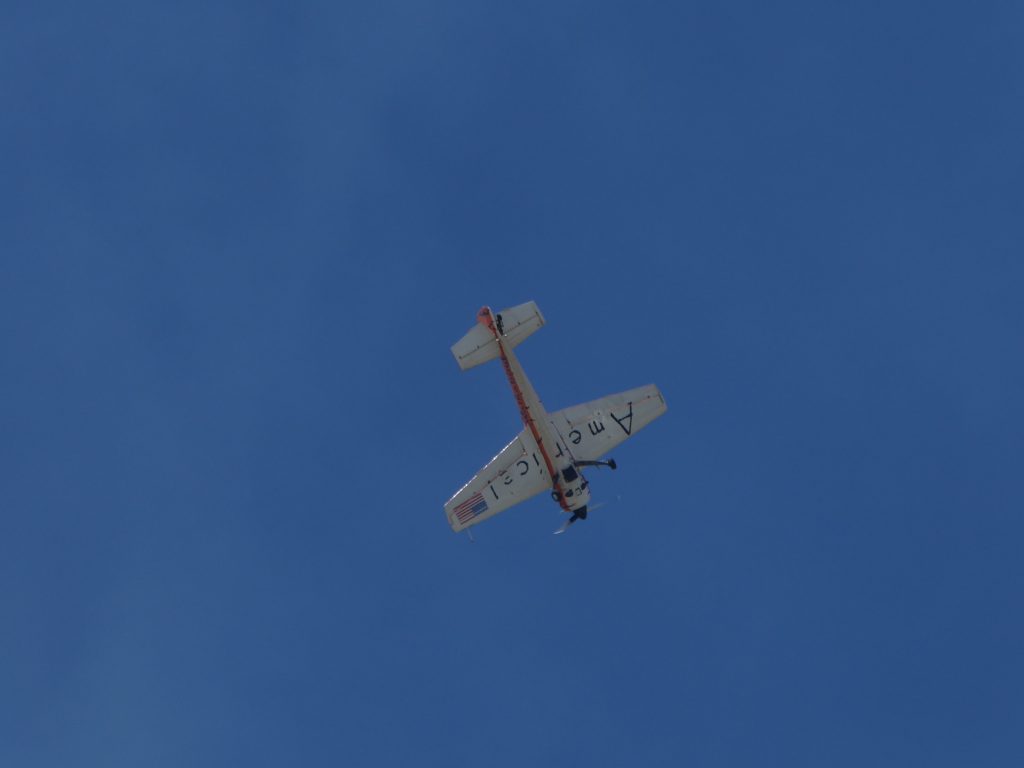 For the parachutes, it seems that the United States Army Parachute Team, aka the Golden Knights, have a lock on this.  These guys have been around since 1959 and seem to be everywhere, both in space and time. 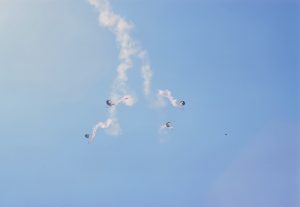 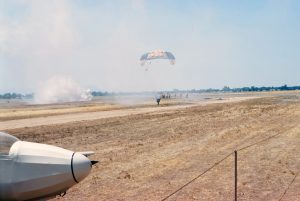 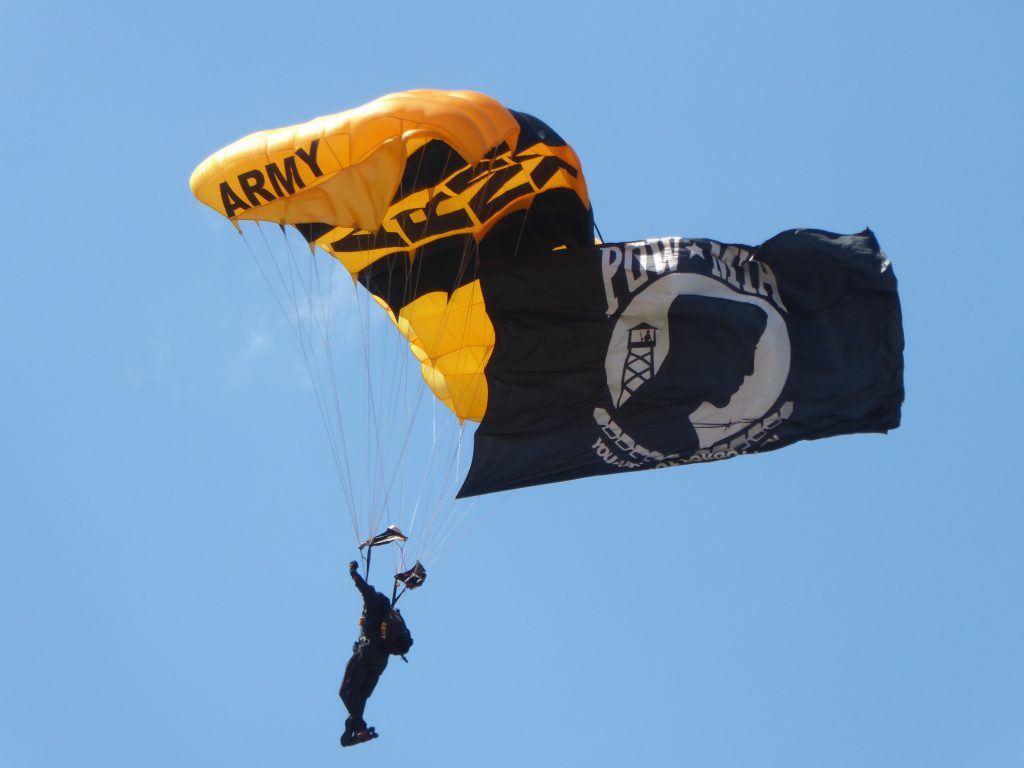 I am guessing these are not the same guys featured in the 1972 Merced Air Show.  The Army Golden Knights at the Cleveland National Air Show (2018).

The Cleveland National Air Show last year also featured something that was not quite air, but not static on the ground, either.  I have never seen it before—something called Shockwave Jet Truck racing an airplane.  It was a bit too monster truck for me, but the crowd seemed to like it.  Also, there was a big explosion followed by fire on the runway.  I think it may have been a recreation of the attack on Pearl Harbor known as Tora! Tora! Tora!  I could be wrong–it was hard to hear the MC from where we sat. 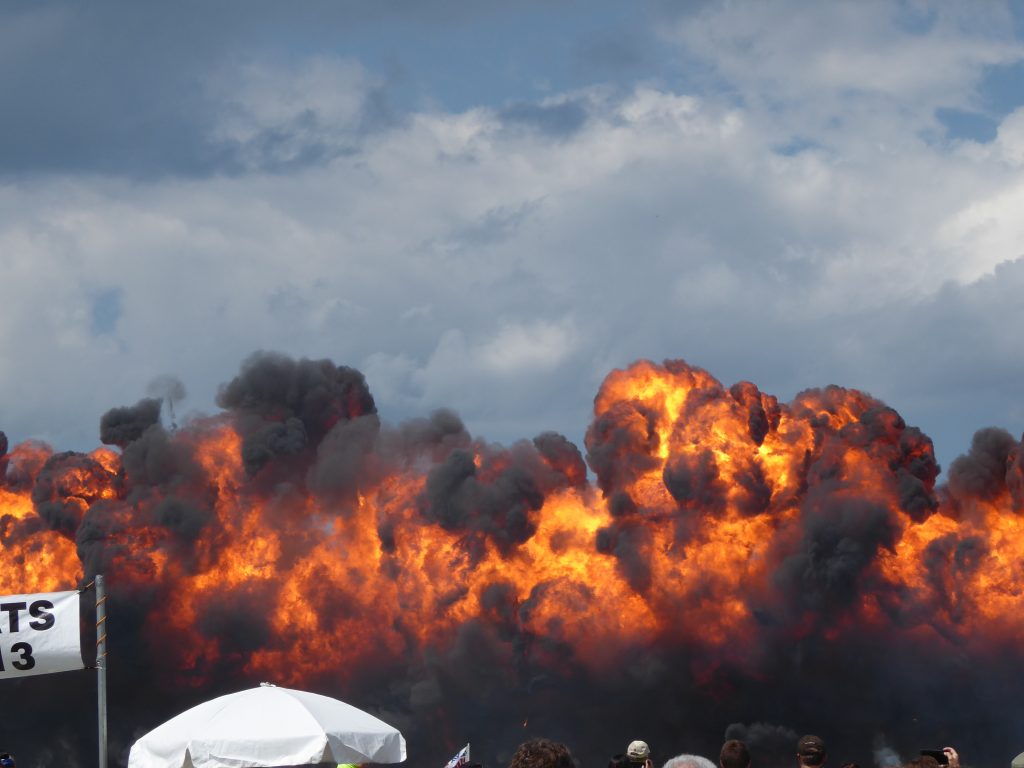 At the end of every first-class air show is the pièce de résistance:  a world-class aerobatic team.  In the United States, that usually means either the Thunderbirds or the Blue Angels.  Yes, please.  And thank you. 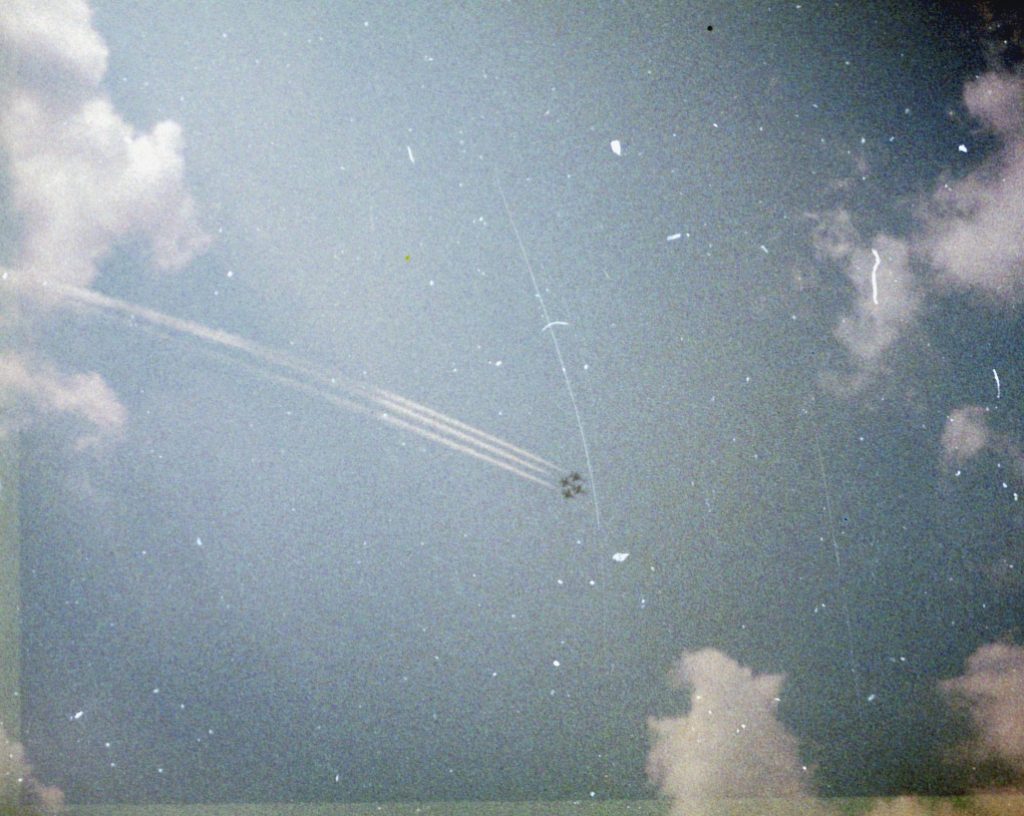 The Thunderbirds, officially known as the USAF Air Demonstration Squadron, was formed in 1953 as a touring aerobatic flying team.  The Thunderbirds fly F-16s, four that fly in diamond formation and two (lead and opposing solos) known as planes 5 and 6. 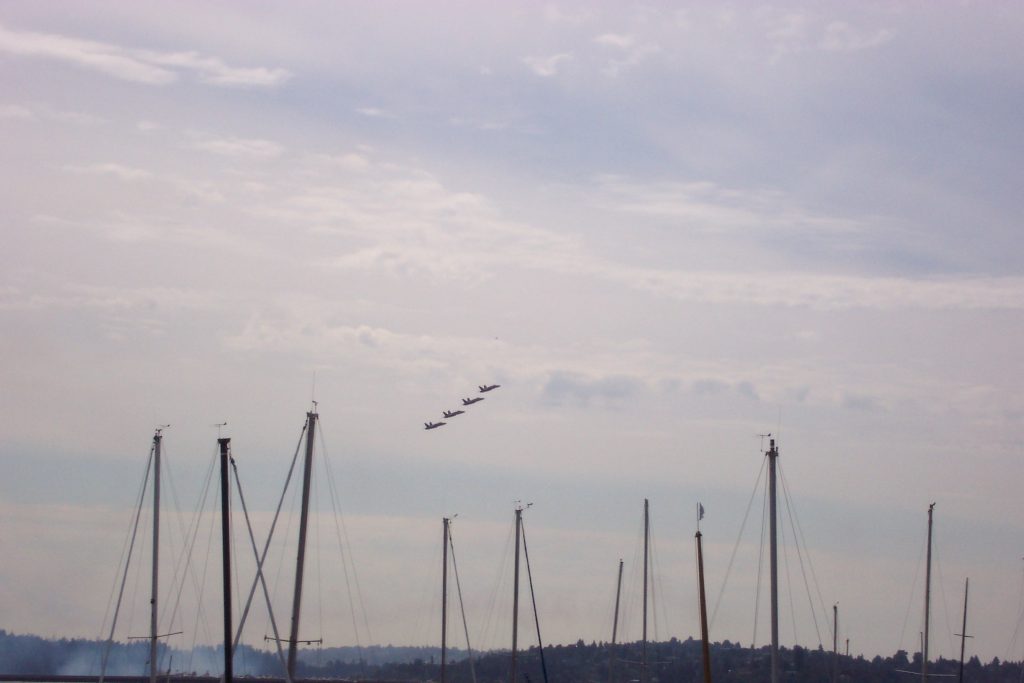 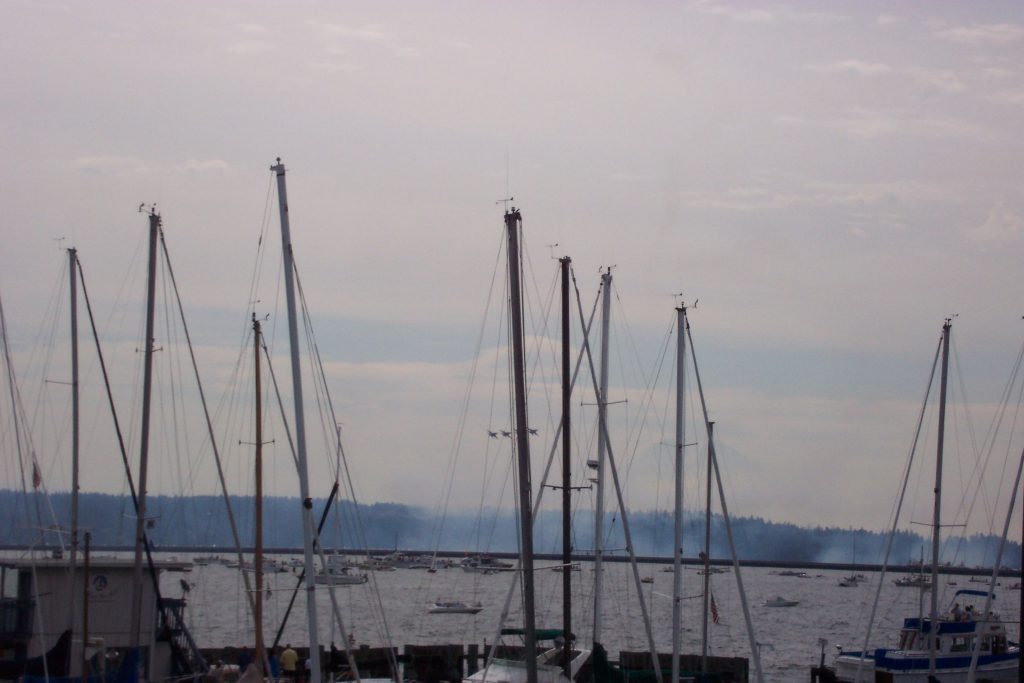 Squint, and you can see more Blue Angels at the Boeing Air Show at Seafair Weekend, Seattle, WA (2003). 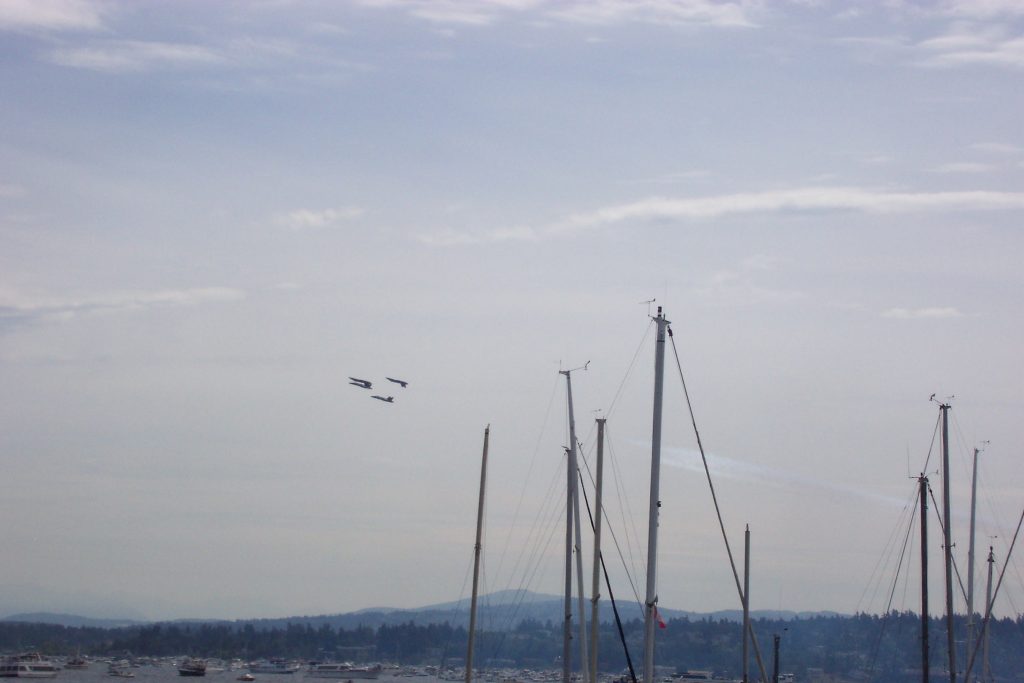 Similarly, the Blue Angels, officially known as United States Navy Flight Demonstration Squadron, was formed in 1946 and also has six planes:  four planes that fly in formation and two (lead and opposing) solo planes.  Unlike the Thunderbirds, the Blue Angels fly the F/A-18 Hornet.  This is not to be confused with Top Gun’s F-14 Tomcat.  If you ask me which Top Gun, I am leaving now. 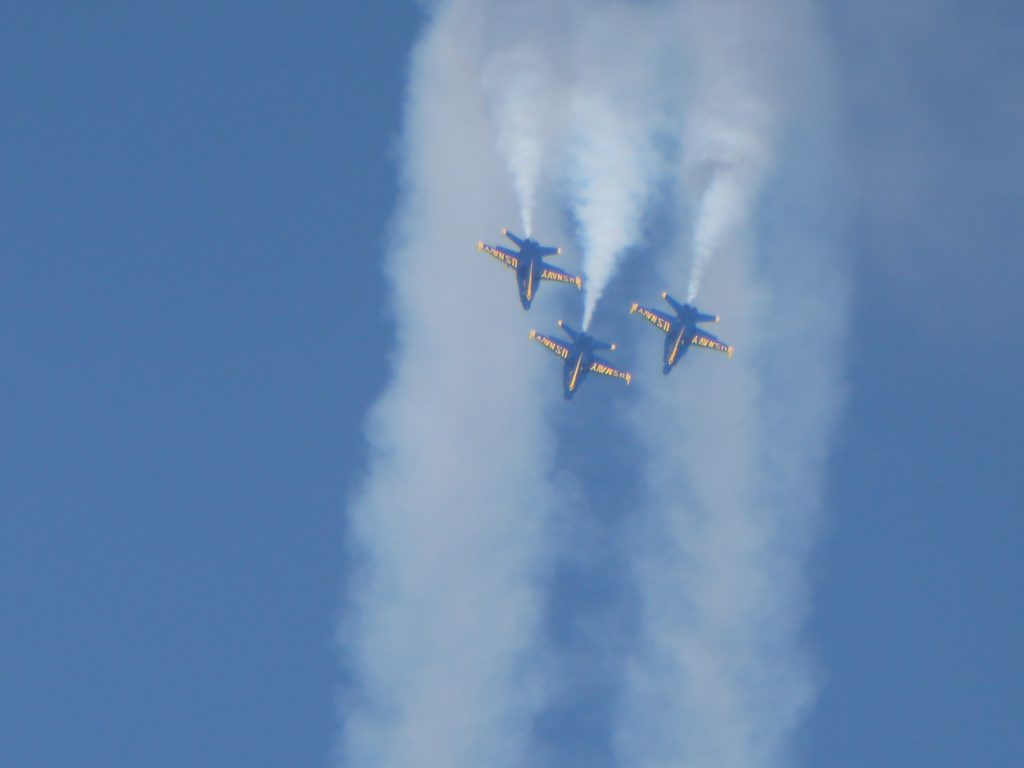 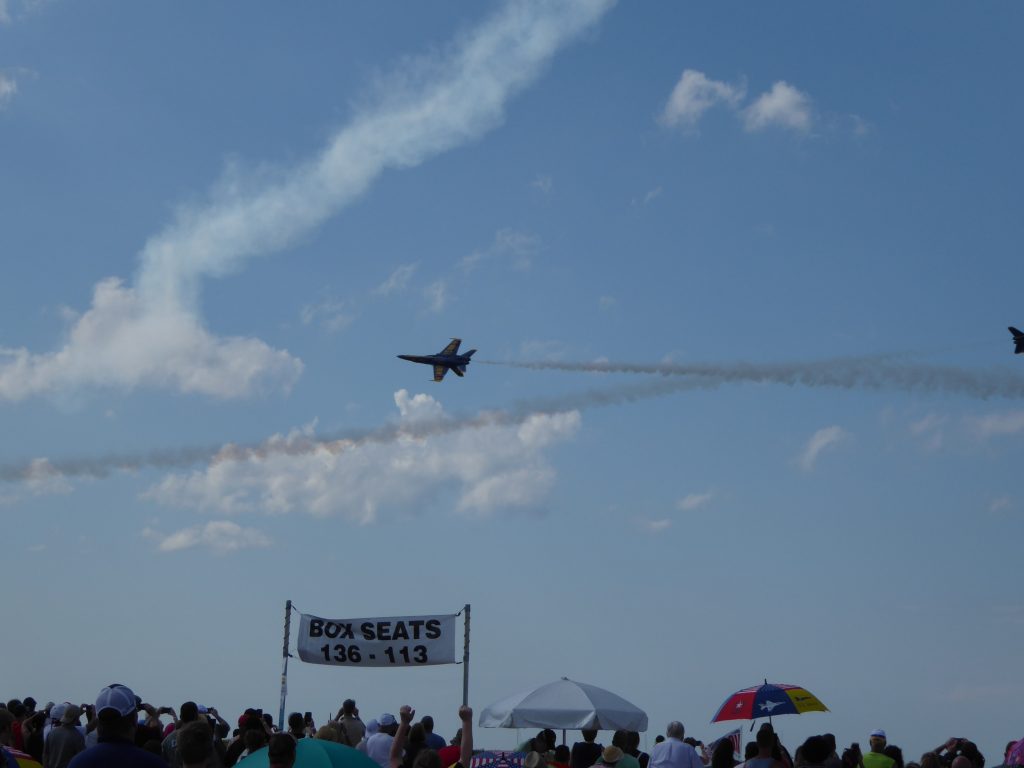 For some, air shows featuring military war craft coupled with an, er, obvious career fair may not be their thing.  Regardless of where you stand on these issues, I argue you cannot deny the awesomeness of these demonstration aerobatic teams.  These are highly skilled and talented pilots.  They fly INCHES apart from one another with such precision.  The maneuvers they perform are breathtaking and extremely dangerous.  Over the years, both teams have lost members either during practice or even air shows.  Two years before we saw the Thunderbirds in Dayton, OH, the team lost four pilots in an accident known as the “Diamond Crash.”  Just last week, the Blue Angels had a near miss when two planes touched in practice. 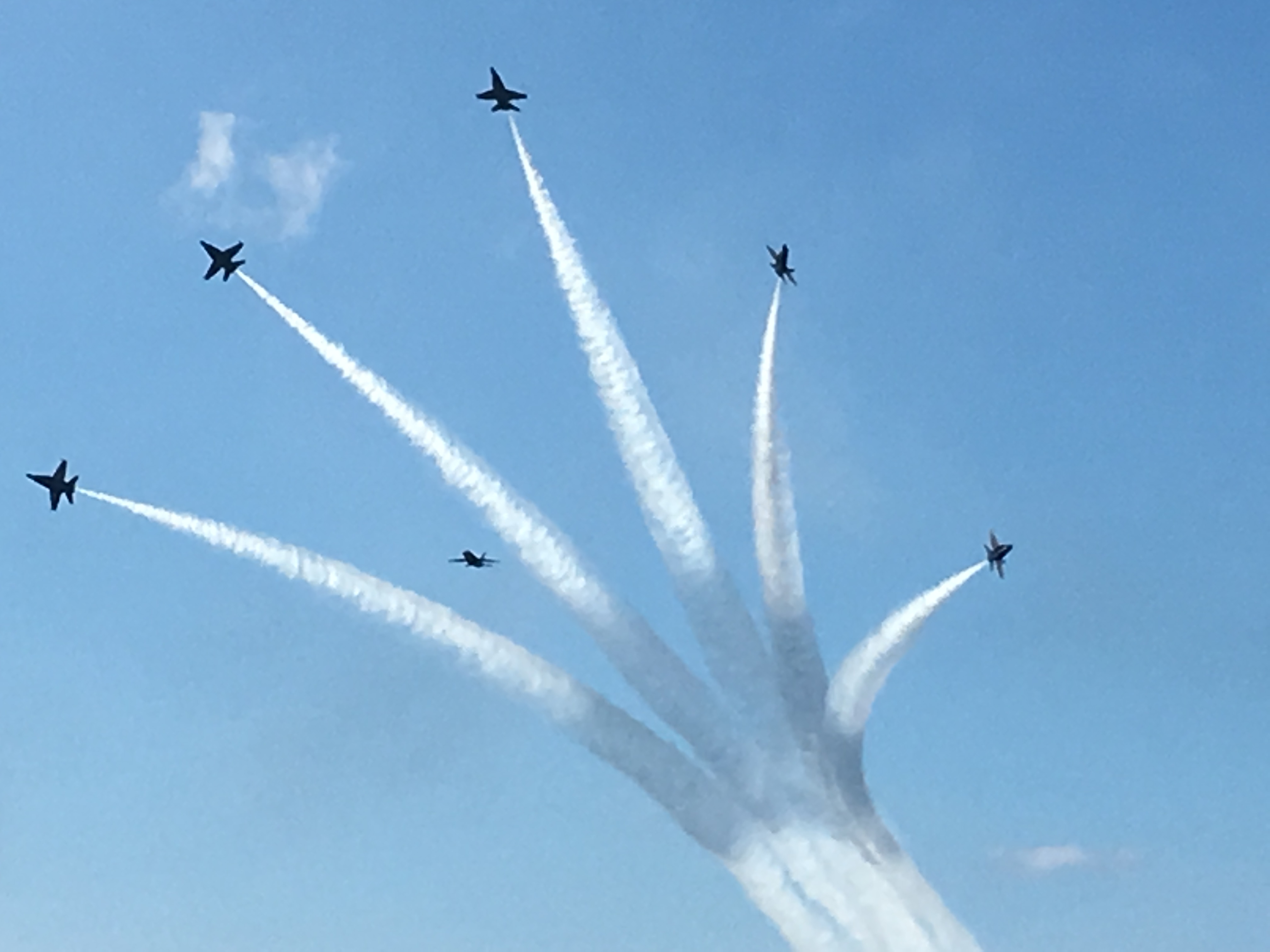 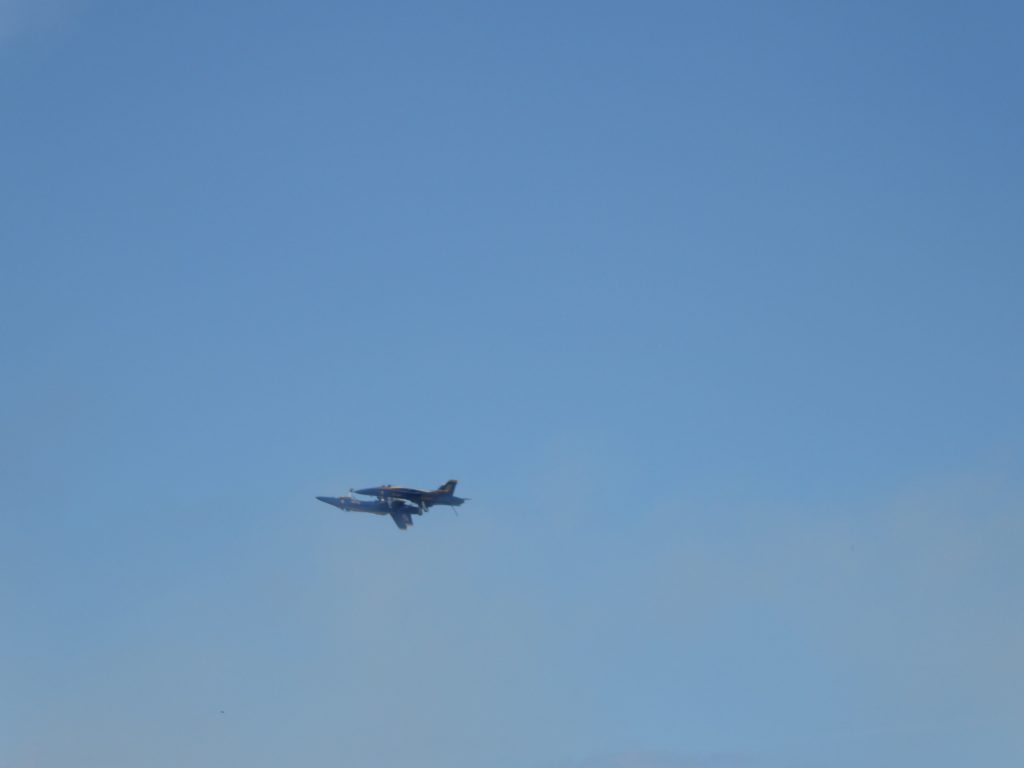 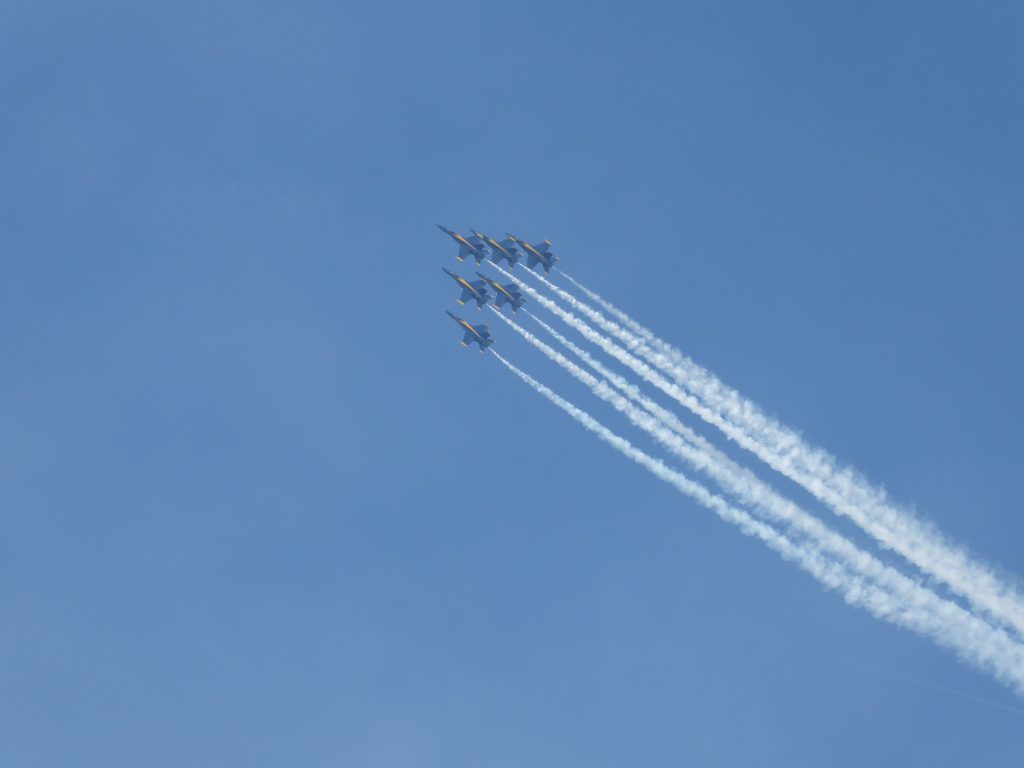 Blue Angels at the Cleveland National Air Show (2018).  These six might be preparing for a delta head on / opposing 360.  Or this is the end of the delta flat pass.  Or maybe this is maneuvering delta.  Who can tell? 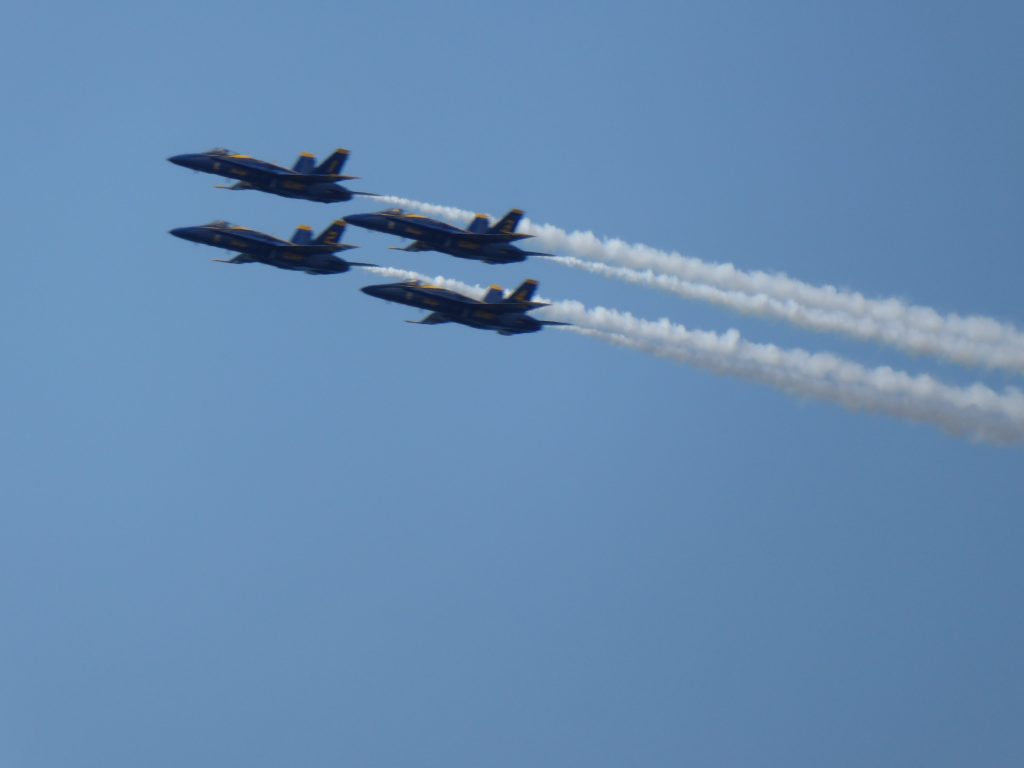 Have I convinced you to go to the air show?  In the event that I did, here are few things to keep in mind.  First, it’s probably going to be very hot and sunny (yes, Cleveland can get quite hot).  Bring loads of sunscreen and keep hydrated.  There’s very little shade at the air show unless you bring your own (keep in mind, though that you don’t want to block the view, either).  Second, the official parking is going to be expensive and maddening.  Finally, the food and drink situation is, well, not the best.  Cleveland has a great microbrew scene right now, but you won’t see any of that at the official air show.  If you want to see the aerobatics but not the ground show, I hear that there are some good spots around town to view the planes such as the top of the Garfield Memorial at the Lakeview Cemetery.

As for the 2019 schedule of exhibits and acts, check the Cleveland National Air Show website for updates.  Typically, this air show alternates between the two national aerobatic teams, so you know what that means….