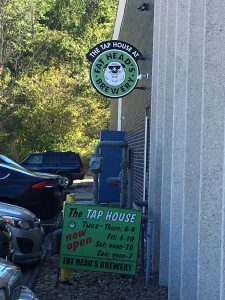 Figure 1. This way to the tap house and food! 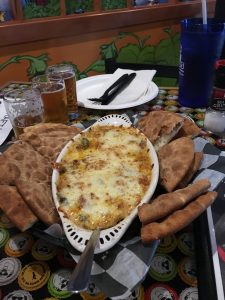 Like every hip American city, Cleveland has a very active local microbrew scene.  I have already visited and written about a few of them, including the widely distributed Great Lakes Brewing Company.  I would be remiss if I did not post about Fat Head’s.

The Saloon is located in North Olmstead, a west-side suburb of Cleveland within Cuyahoga County.  The Saloon was on Steve’s radar, so we made a beeline to it one weekend when we were out and about.   I would like to tell you all about the Saloon experience, but we never made it past the door—there was a two-hour wait that day!  There must be a better way…. 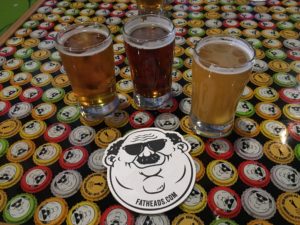 Figure 3. What’ll you have? A sampler, of course! 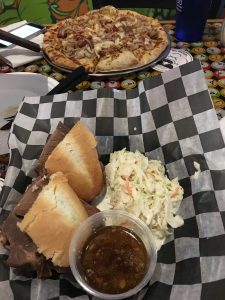 That better way is the Tap House (Figure 1).!  The same great beer and similar menu without the wait.  What more could we ask?

Well, we did ask for some spinach artichoke dip while we pondered our lunch and accompanying drink options (Figure 2).  I love to mix and match, so I ultimately opted for the sampler (Figure 3).  I also spied a French dip sandwich on the menu, so of course I had to try it.  Steve was feeling more like a pizza and chose the BBQ pork (Figure 4).  Of the two, I think Steve made the better choice.  Live and learn!

We visited the Tap House late in the afternoon, so we missed the brewery tour (Figure 5).  We hope to come back soon to learn all about the process.  We hear that the brewery will be expanding in 2017/2018, so we may be touring a different setup.  That’s fine, as long as there are fine taps with some tasty apps and no wait. 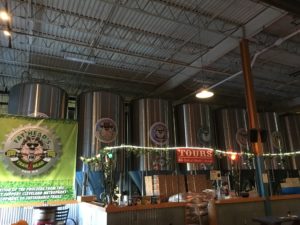