What:  Ballet in Cleveland (The Ashley Bouder Project) and the Nutcracker

When we first discussed moving to Cleveland, Mom asked about the ballet situation. Mom loves to go to the ballet, and we have been fortunate to live in or near cities with a resident ballet company for most of my life. Sadly, Cleveland does not have a resident professional ballet company. The last professional ballet company was a time-share company with San Jose (called “Cleveland San Jose Company” when performing in Cleveland and “San Jose Cleveland Company” when performing in San Jose), but the company left Cleveland out of the equation in 2000 to become just “Ballet San Jose.”

Despite the lack of a resident company, we have come to learn there is plenty of dance to enjoy onstage here in Cleveland. Cases-in-point are the performances organized by Ballet in Cleveland, a non-profit organization dedicated to bringing ballet performances and educational programming to Clevelanders interested in ballet and dance in general. We recently attended the Playhouse Square performance of The Ashley Bouder Project presented by the Ballet in Cleveland 2014 (Figure 1). Ashley Bouder is currently Principal Dancer with the New York City Ballet. The performance was a nice mix of classical (Marius Petipa and George Balanchine choreography) and more modern choreography to the music of Shostakovich.

Not all ballet is organized by Ballet in Cleveland. Other ballet performances that we have seen so far include the 2014 Nutcracker with the Joffrey Ballet based in Chicago and the Cleveland Orchestra (Figure 2). And, we were just advised that Verb Ballets offers performances of contemporary ballet in Cleveland, so we’ll be on the lookout for their schedule in 2015.

Speaking of 2015, Ballet in Cleveland is hosting their annual gala March 13th with featured performances by Misty Copeland, among others. Misty Copeland is a soloist with the American Ballet Theatre and is one of the few African American female soloist in the history of that company. More recently, Misty Copeland was a regular judge on the 2014 season of So You Think You Can Dance (yeah, I watch that....got a problem with it?). We (including Steve!) are intrigued by the thought of seeing Misty dance, even if it means we have to break out that formal attire hiding in the back of our closets. 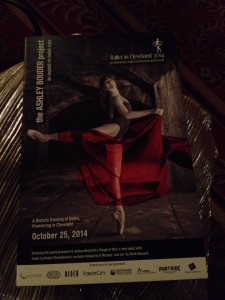 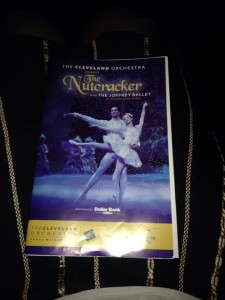 Figure 2. Playbill from The Nutcracker.