Steve and I were so impressed with the Standard Bar & Grill, we were excited to try the other restaurants in the 185th Street district.  As luck would have it, my birthday was only days away from our Standard Bar & Grill experience, so Steve made reservations for two for the 30th on OpenTable.com.  Bistro 185 called Steve the same day to let him know that there was a special sparkling wine pairing dinner on that night and asked if we were interested in that dinner.  Knowing me well, Steve said, “yes, please!”  Little did we know….

Anyway, we pulled up to the restaurant close to the time of seating and found the small parking lot full, so we had to park on the street.  For Jonathan Haines, the parking situation is a bad thing.  For us, it seemed the restaurant was popular, so it’s not necessarily a bad thing.  The restaurant was crowded, that’s for sure.  We opened the door and immediately felt uncomfortable.  The restaurant is divided into a bar area on the left and a restaurant on the right.  The host seated us right away…in a booth meant and destined for four people.  Uh, we made reservations for two ‘cause it’s my birthday.  We asked the host to re-seat us, but he said that’s where we were assigned.  The server came by to ask for our cocktail order pre-dinner, and we again asked to be re-seated (at this point, I was whining that it was my birthday).  The server understood the situation better than the host and did re-seat us at a small table for two squeezed between two longer tables.  I am telling you, the place was packed.  Interestingly, Steve and I were the only ones that seemed concerned about the seating situation.  In fact, it seemed a lot of people knew each other as if it were a Cheers situation.  We couldn’t put our finger on it, but there was something strange or different about the atmosphere.  Being the polite gentleman that he is, Steve offered the gentle opinion that this restaurant and its crowd seemed to be from a different era.  Indeed, this hypothesis was supported by the dishes paired with various sparkling wines:  all seemed heavy handed and old-fashioned.  Despite the abundance of sauce, some dishes were in fact tasty (such as the clams, see Figure 1).  Unfortunately, the food coupled with the awkward atmosphere (Figure 2) make it very unlikely that Steve and I will be back. 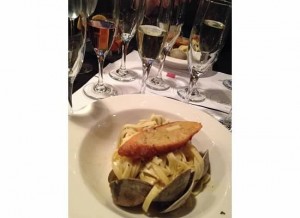 Figure 1. Linguine with clams and fennel. A very tasty course! 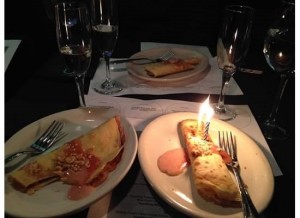 Figure 2. Nutella-filled orange crepe.  Yeah, I guess I whined so much about the seating and my birthday that they had to bring a crepe with a candle in addition to a back-up crepe.  I was too stuffed to finish either one.  They probably don’t like me now.