It’s summer in Cleveland!  What does that mean?  Sun!  Vitamin D!  And, Blossom! 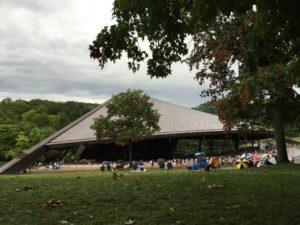 The Blossom Music Center, located in the Cuyahoga Valley National Park in Cuyahoga Falls, is the home of the Cleveland Orchestra and other musical guests during the summer.  Blossom is an outdoor amphitheater in the middle of the park, a setting that provides covered seating as well as open-air lawn seating for thousands (Figure 1).

I have come to appreciate that there are some die-hard fans of Blossom here in Cleveland.  The Blossom Music Festival is ten weeks starting the weekend of the 4th of July.  Fans snatch up summer-long lawn passes, pack up their coolers, and tote their chairs for these weekly shows, come rain or shine! 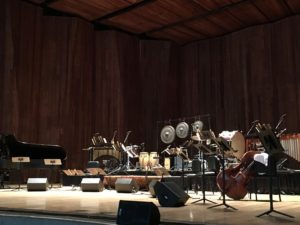 We saw this first-hand at our first Blossom experience last year.  Mom and I bought pavilion (covered) tickets to see YoYo Ma’s Silk Road Ensemble (Figure 2).  One look at the radar confirmed we made a wise choice to splurge on the seats (Figure 3).  Fortunately for us, we managed to finish our purchased picnic before the rains came (Figure 4).  And, boy, did they come.  For the die-hard fans of Blosssom, this was nothing.  They just popped open their tents (!) and listened to the concert out in the open lawn.  They put our umbrella to shame. 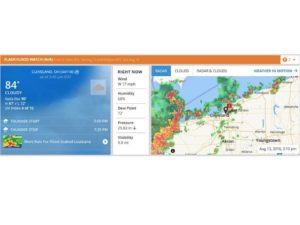 Figure 3. Here comes the rain again, falling on my head like a memory….. ooooooooooo…… ahhhhhhhh. 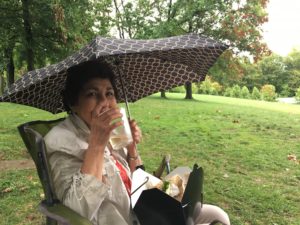 Figure 4. Blossom rookies. We just had a simple umbrella.

Our second Blossom outing was the most recent Independence Day concert “A Salute to America,” complete with fireworks.  Earlier in the week, there was a threat of thunderstorms, but on the day, the skies were clear and ready for the show.

I had not been to a 4th of July concert in years.  And, of those I have attended, I actually played in the band (Figure 5).  For those non-band years, we never bothered to go out to see the fireworks for fear of the crowds and traffic.  Plus, it just feels weird to watch a show instead of being in the show. 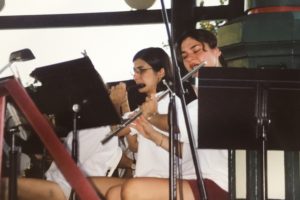 Despite my misgivings, Mom and her friend convinced me to go.  We arrived as the doors opened to ensure we got a spot on the lawn within eyesight of the pavilion.  As we predicted, the venue filled up with people of all ages (Figure 6).  And the parking lot brimmed with cars.  Oh, this was going to be a long night.

The concert itself was, of course, great.  They played classic band pieces such as John Phillip Sousa’s “Stars and Stripes Forever” and “Semper Fidelis” (where I annoyingly hummed my parts).  They even pulled out some fun Leroy Anderson.  And they ended with the classic “1812 Overture” complete with cannons followed by the much anticipated fireworks show (Figure 7).

After the smoke cleared, we along with a thousand or so of our closest friends, made our way back to our cars and back to Cleveland.  As we predicted, it took some time to drive home, and we all went to bed well after midnight.  But it was well worth it, cannons and all. 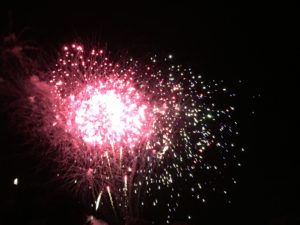 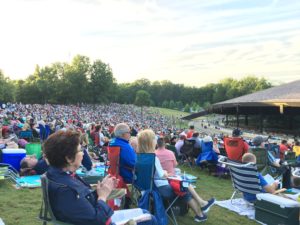 Figure 6. A packed lawn at Blossom.