Did you know there is a national park near Cleveland? No? Neither did we until we moved here. I am delighted to declare that Cleveland is very close to the Cuyahoga Valley National Park, the only national park in Ohio. The national park designation was relatively recent for national parks (2000), but the land has been an Ohio and national recreation area as far back as 1974 (OK, that’s still relatively recent as parks go…).   The park runs more than 20,0000 acres along the Cuyahoga River between Akron (think: LeBron’s hometown) and Cleveland (think: LeBron’s workplace). Apparently, “Cuyahoga” means “crooked river” in Mohawk (an Iroquoian language). I would tell you how to pronounce the name of the river, but in researching this article on the internet, I found I may have been mispronouncing it for months (NPR Letters:  Cuyahoga River). Regardless of its pronunciation, you might remember the river or know it from the famous “river caught fire” incident in the 1960s. The river also famously feeds Lake Erie. The latter famous designation is probably the locally preferred designation.

This past Labor Day, Steve and I decided to scope out the national park located practically in our backyard. We basically drove the length of the park in one afternoon and stopped at a few sites including Brandywine Falls (Figure). There is a nice boardwalk from which to safely view the 65 foot falls. For those interested, there are trails and even a bed and breakfast in the area. The area used to be used for water power and had a thriving community, but very little is left from those days save a few foundation pillars and the bed and breakfast built in 1848, formerly the home of a resident of Brandywine Mills. Also nearby is the Boston Mills Brandywine ski area. Based on a quick glance, the ski area might be fun for a day or so, but don’t expect Park City or anything.

We only scraped the surface of the Cuyahoga Valley National Park that day, so we plan to be back this spring and summer to enjoy more of what the park and surrounding towns have to offer. 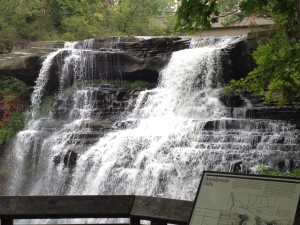