What:  Little Italy’s Feast of Assumption

New York, for sure. Philadelphia, yes I learned this first-hand from traveling. But, Cleveland? I really had no idea….

I really had no idea that Cleveland has a sizeable Italian-American population. I have never equated Cleveland with anything remotely Italian, let alone having a thriving and popular Little Italy neighborhood. Who knew that Chef Boyardee was a) based on a real person who b) settled in Cleveland? Well, I didn’t….

As most of us are aware, Italians immigrated to the United States in massive numbers at the turn of the century. Many immigrated to the large cities in the northeastern United States and took up residence in the older sections of the cities, forming “little Italys” (or is it “Italies”?). Of the estimated four million or so Italian immigrants, Cleveland received approximately 20,000, and they settled in six neighborhoods, including the neighborhood centered around Mayfield Road and Murray Hill Road that still endures as today’s Cleveland’s Little Italy.

Little Italy is literally a few blocks away from CWRU’s Wolstein Research Building, home of our Institute for Computational Biology and many of the faculty in the Department of Epidemiology and Biostatistics. All of us enjoy Little Italy for the unique and tasty lunch and dinner options. Parking is famously a challenge in this small neighborhood, so we have significant advantage being within walking distance. For some faculty, like Jonathan Haines and Will Bush, Little Italy is within walking distance from their homes. Lucky them! As for me, Little Italy would be a long walk from the house, so I usually park in the garage at work and walk over if it’s the weekend and we want to enjoy the neighborhood.

Little Italy has many opportunities throughout the year to enjoy the history of the neighborhood and its inhabitants. One such opportunity is the annual Feast of Assumption, held every August in celebration of The Assumption (August 15th). I have to admit that I did not know what the assumption was. I thought it was related to food, probably because it rhymes with “consumption” (and, admittedly, that doesn’t make sense either because “consumption” can be another word for tuberculosis). It turns out that I was half-way correct. The annual Feast of Assumption does indeed involve food. Lots and lots of Italian food. But first, some background… 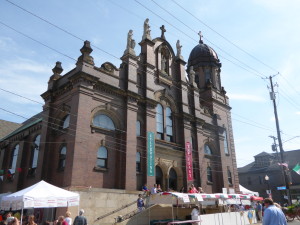 Cleveland’s Little Italy and its Holy Rosary Church (Figure 1) have celebrated the Feast of Assumption since 1898. The Feast is a Catholic Holy day that celebrates the Mary’s assumption or entrance into heaven. Yeah, I didn’t know that, which may surprise you if you knew I went to a Catholic school for the early grades (Figure 2). But, then again, Mom didn’t know about this either, and she’s been Catholic forever (Figure 3). 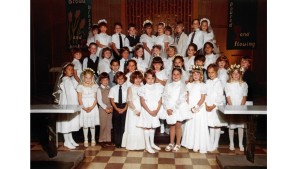 Figure 2. My first communion circa 1982. Can’t find me? I’ll give you hint: I had already stopped paying attention. 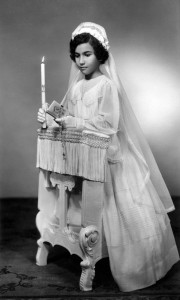 An observation based mostly on my travel is that the same religion, in this case Catholicism, can be practiced very differently depending on the community. Each community adopts its own patron saints and has its own collection of favorite relics. Mom often talks about the difference between US Catholicism and Mexican Catholicism (Figure 4), and even within Mexico, the big city parishes are much different than the churches in small rural towns. Spain also has its own twist on traditions for the same Catholic holidays. In 2014, we happened to be in Madrid during Semana Santa (Holy Week) where they celebrate the coming Easter with a fancy drum circle. And, each day of that week, local churches dust off their favorite Mary and parade her and patron saint banners through the streets (Figures 5 and 6). 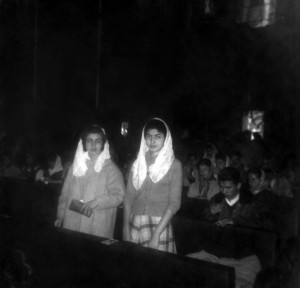 Figure 4. An example of Catholicism in Mexico circa 1950s. Why are they wearing mantillas in the church? I don’t know, and I doubt they do either.

Cleveland’s Holy Rosary Church is no different in that it has its own set of Catholic traditions and patron saints as well as statue of Mary that makes a yearly parade appearance. We, of course, had to come see the parade. Mom and I came early to the Feast and had time to peruse the banners of patron saints that were going to be carried through the parade. It will be no surprise to you that I didn’t recognize a single saint on those banners. The patron saint of wool combers? Yeah, that one was not on my radar (Figure 7). And, as Mom always points out, each church has their own version of Mary (Figure 8). 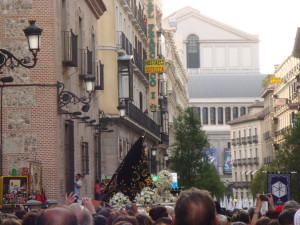 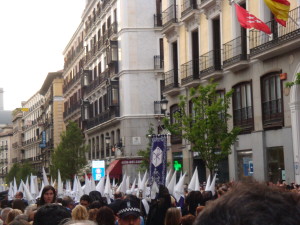 Figure 6. Penitentes with their medieval capirotes (pointed hats) in Madrid’s la Procesion de la Soledad (2014). As an American, I have to admit it was a bit uncomfortable to witness a parade of people dressed in all white robes and hoods. 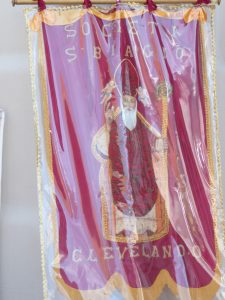 Figure 7. Saint Blaise (aka Saint Blase), patron saint of wool combers. There are over 800 canonized saints and the list keeps growing. Only a Catholic geek like Stephen Colbert will memorize this list, and even he probably gets some of the names mixed up with characters from Lord of the Rings. 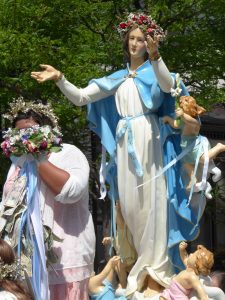 Not Catholic? That’s OK. The Feast is actually much more than a religious holiday and has evolved into a celebration of Italian heritage and culture. The four-day festival includes the aforementioned parade, which includes people dressed in regional Italian regalia, and local Italian eats. Mom and I ate at Mia Bella and satisfied our sweet tooth at Presti’s Bakery (Figure 9). Bring lots of cash because most places will only accept that or festival tickets during those days. Be aware that restaurants offer only a limited menu and seating is scarce (Figure 10). But, be rest assured that Cleveland in August is nice and warm, so you won’t mind eating outside on a bench or on the curb as you watch the parade go by 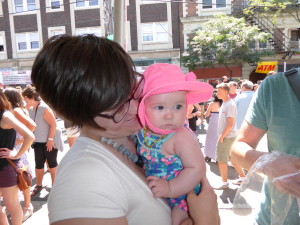 Figure 9. Dr. Jessica Cooke Bailey and Remy at the Presti’s Bakery counter. I think Remy’s got her eye on a cannoli. 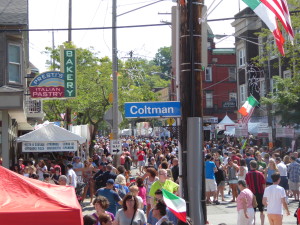 Figure 10. Cleveland’s Little Italy Feast of Assumption 2015. Consider bringing your own seat when you visit this popular event next year.