I have to admit this place has a special place in my heart.  I first discovered Pacific East when I started at CWRU but had not yet moved here to Cleveland.  I was staying at a hotel out near Eton Chagrin Boulevard, and Pacific Rim was a great option when it’s dinner for one.  I have since learned that there are two locations:  one at Eton Chagrin Boulevard and one at Coventry.

Steve and I have been to both locations.  The Eton Chagrin Boulevard location is the smaller of the two, but it seems no less busy than the bigger location.  As a quick aside, Eton Chagrin Boulevard is an indoor-outdoor mall with shops and restaurants.  Eton is not a big shopping area, but it does have shopping not found in surrounding area malls.  Also, Eton, like other outdoor shopping malls (such as Legacy Village) offers free entertainment during the warm summer nights. 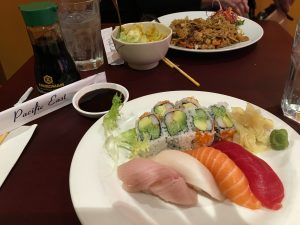 Pacific East, at both locations, offers pretty good sushi at decent (not cheap, decent) prices.  When I dined for one or have dined as one of two with Steve, I typically have the nigiri sushi and sashimi combo for one or the bridge for two.  I recently lunched there with Mom where I had the sushi lunch special and she had the yaki soba (Figure).  This is a safe dining option for Mom given she’s lactose intolerant and many servers and/or kitchens don’t seem to understand what ingredients are considered “dairy” (more on this later).

Honestly, my fondest memory of Pacific East was my first experience there at the sushi bar in Eton Chagrin Boulevard dining as one.  I sat down and placed an order, and then left briefly for the restroom.  When I returned, the couple sitting next to me asked me if I was an actress.  Specifically, they were wondering if I was Gina Bellman of TNT’s Leverage.  Sorry to disappoint, but I was not.  I later recounted this story to my sister, and she was not surprised.  Apparently, I was having my first Liz Lemmon moment in Cleveland.  I could get used to this!