For most families, the celebration of Thanksgiving heralds the official beginning of the holidays culminating with the end of the year. For me, Thanksgiving puts me in a panic. Mom’s birthday is fasting approaching, and I am not prepared!

Not this year! Not only did I order her gift early, I knew where we were going to dinner. Where do you take Maria Graciela for dinner in Cleveland? Momocho Mod Mex, that’s where! Perfect! Or, so I thought.

Momocho Mod Mex is described as a hip restaurant that puts a modern spin on Mexican cuisine. We love Mexican food, but we have had a hard time finding the real thing in most places we have lived (in Seattle, La Carta de Oaxaca was an exceptional gem). If you are accustomed to nachos and things covered in cheese, you have not yet had real Mexican food. Or real food, for that matter.

We made reservations for 6:30pm thinking this would give me plenty of time to come home from work before we headed out to eat. The drive from Cleveland Heights to Ohio City usually take less than 30 minutes, and it’s pretty much a straight shot. We piled into the car at 6pm and we were off and running. We were running, that is, until we hit some major traffic. Traffic? On a Tuesday night? Turns out, it was the worst kind of traffic—it was game day traffic. Note to self: check the Cavs schedule before leaving the house.

We were 45 minutes late for our reservation (!), but no matter. We were seated immediately upstairs in what I presume is more of the “dining room” as opposed to the more casual bar or cantina downstairs. Mom was immediately intrigued by the décor of the room. Instead of the clichéd sombrero wearing mariachis, Momocho’s wall were decorated with posters of Mexican wrestlers (Figure 1). Mom explained to us that the masked luchador, El Santo, was popular in Mexico in the 1940s and 1950s. And Mom would know a thing or two about Mexican wrestling: her father wrestled to support himself in medical school (Figure 2). 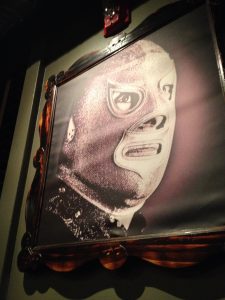 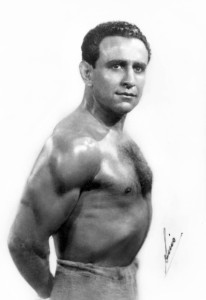 Mom immediately suspected the owner of the restaurant was her age. I mean, who would think to decorate the restaurant with posters of Lucha Libre (professional wrestling) wrestlers from the 1950s? Mom quickly flagged down our poor, unsuspecting server. What’s the story, Mom demanded? The server proudly explained that the chef owner Eric Williams was not old (ouch, Mom!) and has young sons. As a tribute to his sons, Williams created a fun theme reminiscent of decorating a kid’s bedroom with super hero stuff. The name of the restaurant, as the server told us, means “trouble maker” in Spanish. Really? That was news to Mom.

Oh, dear. The poor server was unprepared for our table. Shaken but not completely stirred, the server asked for our first round of drinks. Momocho has an interesting selection of Mexican beers, tequilas (Figure 3) and margaritas. Lucky for me, I didn’t have to choose one margarita—they have a sampler that includes three (Figure 4)! 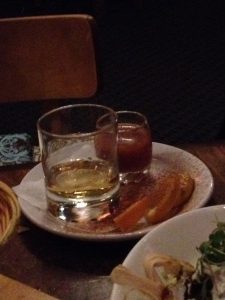 Figure 3. Tequila with a side of sangrita 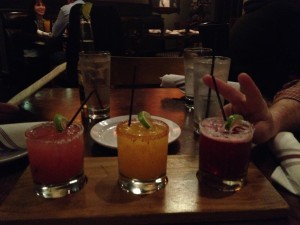 As for the food, yes, it is modern. Mexican? Well…let’s put it this way. I know Mexico is known for peppers, but shishito is not one of them (Figure 5). What should we expect from a chef that is responsible for The Happy Dog, a place that allows you to top your hot dog with anything and everything, including Fruit Loops? Nevertheless, the Mexican influence was evident, and attention was paid to detail no matter the origin of the cuisine. We started with aforementioned shishito peppers along with traditional guacamole paired with hand-made tortilla chips (Figure 5). For our entrees, I had el pato (duck; Figure 6), Mom had la barriga (crispy pork belly; Figure 7), and Steve had the beef short ribbed tamales. We also had sides of black beans and rice, the latter of which looked like it came from Steve’s cute little Japanese rice cooker that plays a tune when the rice is cooked. The entrees Mom and I ordered came with tortillas, a highlight since they were hand-made (by La Bamba Torterilla?) and the perfect size for taquitos (data not shown ‘cause we ate them!). 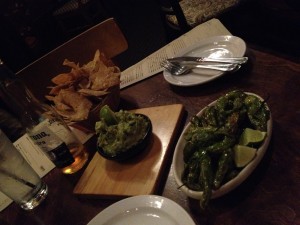 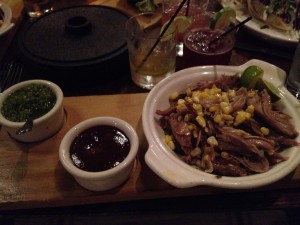 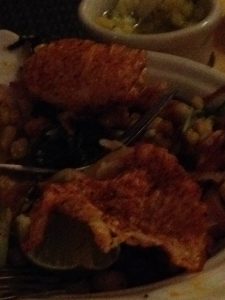 Since it was Mom’s birthday, we ended the night with a dessert. Mom recognized la capirotada. Mom explained that this dessert was common in Mexico when she was young. Basically, the dessert consists of leftover bolillo (like a baguette) soaked in a mixture of brown sugar, water, and cinnamon and topped with raisins and nuts (and sometimes cheese). It was usually served with ice cream. Momocho’s version was little different (Figure 8): it was prepared with ginger snaps and topped with whipped cream. Despite the variations in preparation, this version of the Mexican bread pudding hit the spot. 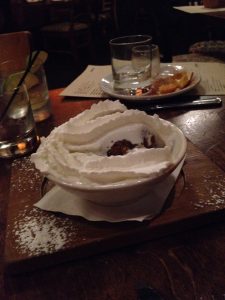 Was Momocho mod? Yes. Mex? Not really. We will be back? Absolutely!