What: Kathryn Morgan and The Red Shoes

Much like my manuscripts, grants, and other official work duties, I find myself perpetually late in fulfilling my blog duties. Consequently, I write about events and dining experiences that took place months ago and, shamefully, over a year ago (sound familiar, editors Bill Scott and Marylyn Ritchie?). But, so be it—it will be done when it’s done! But, I digress once again….

Back in mid-September of this year, Mom heard that someone was performing The Red Shoes in Cleveland. Both of us were familiar of The Red Shoes as a movie from 1948. Granted, I was obviously too young (that is, non-existent) to see it in its first run, but I must admit that as a pre-teen and teenager, I was a big fan of old time movie musicals. I devoured movies starring Fred Astaire, Gene Kelly, and other musical stars of the golden age spanning from the 1930s (42nd Street with Ruby Keeler; Top Hat with Fred Astaire and Ginger Rogers), into the 1940s (Astaire and Rogers in The Barkleys of Broadway; Meet Me in St. Louis with Judy Garland), through the 1950s (White Christmas and Vera Ellen; Singing in the Rain with Cyd Charisse) to the early 1960s (West Side Story and Rita Moreno). Sure, some of these musicals haven’t stood the test of time (I’m looking at you, Seven Brides for Seven Brothers), but others have earned a beautiful patina and are a joy to watch even today if not for the silly simplistic plots but for the dancing, oh the dancing.

Most of the dancing portrayed in these musicals was based on ballroom dancing, such as elegant foxtrots by Fred Astaire and Ginger Rogers or tap dancing by the Nicholas brothers or the fantabulous Eleanor Powell. Occasionally, ballet was featured in prominent movies such as American in Paris with Gene Kelly and Leslie Caron. Caron also starred in Daddy Long Legs and Gigi, both of which are hard (nay, agonizing) to watch in modern times (“Thank Heaven for Little Girls”—really?). And, of course, ballet was the central feature of The Red Shoes.

For those of you not familiar with the movie The Red Shoes, the protagonist is a ballet dancer caught between a career on stage or being with her lover. Honestly, I don’t remember much of the movie plot, but I do remember the final dance scenes where she dramatically leaves the theater and dances about town. In the end, she decides to end her life by throwing herself in front of a train or something like that.

Again, many of the movies from this time do not sit well with the average modern (female) viewer, and The Red Shoes is probably no different. But, if you ignore the plot, the dancing is beautiful. And, I had never heard of it performed on the stage, so I was intrigued. So, off we went to the ballet once again at Playhouse Square, this one presented by Ballet in the City (Figure 1). 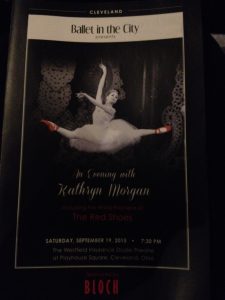 Figure 1. The Red Shoes, an Evening with Kathryn Morgan presented by Ballet in the City. September 19, 2015.

Honestly, Mom and I were both confused when we arrived. The ballet was not staged in the theaters with which we have already become familiar. Instead, we were seated in a very small theater. And, the playbill made it clear that this was a single dancer, Kathryn Morgan, dancing several selections including the world premier of The Red Shoes. Mom and I are fans of dance, but we are not necessarily experts on the latest dance stars or up on the latest dance news. Consequently, we had no idea who Kathryn Morgan was or how unusual her story has been to date. But once the show started and unfolded, we began to understand why and what happened.

To put this in perspective, Ms. Morgan appeared on stage to perform an excerpt from Don Quixote. Both Mom and I had the same unspoken reaction: Is this the headlining dancer? After another piece or two, it was obvious that yes, she was. Don’t get us wrong—after a few turns and pirouettes, it was clear this was a very accomplished professional dancer.   But, she didn’t look like a typical dancer.

During intermission (Figure 2), Mom and I discussed this at length. At this point, I knew there had to be a story. So, out came the smart phone and the Googling commenced. Sure enough, there it was: Kathryn Morgan was forced to leave the New York Ballet after gaining 40 pounds. Kathryn was eventually diagnosed with hypothyroidism. 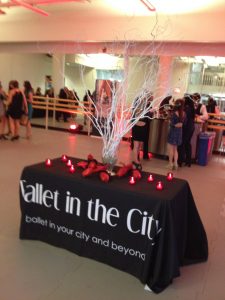 Figure 2. Intermission organized by Ballet in the City.

Wow. Hypothyroidism.   That hits a little close to home. Close not because I have been diagnosed with it or a family member has been diagnosed with it. No, it’s close to home because our group identified genetic variants associated with hypothyroidism (PMC3188836). I could not help but think of this as I read the articles where Kathryn spent several years wondering what was happening to her body and overall health.

After intermission, Kathryn performed an energetic and engaging interpretation of The Red Shoes. This version of The Red Shoes is more closely based on the fairy tale by Hans Christian Andersen compared with the movie version. You might be more familiar with Hans Christian Andersen’s other famous work such as The Little Mermaid. If you have only seen the Disney version, you will be quite shocked when you read the original version.

The Red Shoes is equally dark. In this fairy tale, the protagonist is a spoiled girl who wants to wear her pretty but less-than-modest red shoes to church. The girl is punished for her continued vanity by being cursed to forever dance in her red shoes that she cannot remove. Suffice to say, the fairy tale does not have a happy ending and involves amputation among other gruesome scenes. Try reading that to your kids before bed!

The ballet version debuted by Kathryn Morgan was full of theatrics and energy. The dancing was impressive, but more impressive to me was her facial expressions. Kathryn is very much an effective actress, and each of us in the audience could see it.

Admittedly, there not as much dance as we had expected, and the rest of the night was filled with video clips of previous performances as part of the New York City Ballet and clips based on her new life post-diagnosis. Also, a good portion of the night was an extensive Q&A post-performance (Figure 3). It was here we the audience learned about Kathryn’s diagnostic odyssey and her evolution and reinvention as a performer. We also caught a glimpse of Kathryn’s resurrected career as a vlogger, YouTube star, and actress. 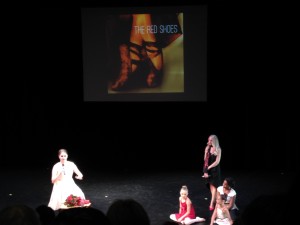 During the Q&A, I couldn’t help but wonder if the promise of precision medicine would have helped Kathryn in realizing a diagnosis or risk assessment for hypothyroidism earlier in her life, thus saving her from the painful surprise and near career-ending experience. Of course, we are not there yet, and much research is left to be done for this as well as other conditions. Kathryn, for example, described recent problems in finding the right medication and dose for her hypothyroidism. To my knowledge, there are no pharmacogenomic studies for this treatment. Kathryn’s personal story is one but many that remind me of the remaining gaps in research and the desperate need for increased federal funding towards these efforts. More on that later, for sure…