Post-doctoral fellow Dr. Jessica Cooke Bailey and her husband Matt have been raving about Noodlecat ever since we moved here. Every few weeks, we would vow to get together and share the Noodlecat experience, but alas, schedules failed to align. Between conferences, meetings, manuscript deadlines, and just life, we could not seem to find a date to slurp the noodles. Until now.

It just happened that Jessica, Matt, and little Remy were available the day after Steve and I discovered Flying Cranes Café. As I described in my most recent post, I chose the pork ramen at this Japanese-English eatery in Larchmere. For most, the thought of two days of ramen in a row would be impossible to stomach, perhaps evoking an earlier time of dorm and apartment living with dried packets of noodles for sustenance.   Not for me—bring on the head-to-head comparison, I say!

Noodlecat, owned by Jonathon Sawyer (the same guy responsible for the nearby The Greenhouse Tavern), is located downtown in the Gateway District. Unlike some of the fancier surrounding eateries, Noodlecat bills itself as a no-nonsense Japanese soba, udon, and ramen place using locally sourced Ohio ingredients. The décor is decidedly casual (Figure 1), and the menu is limited to a few styles of noodles, steam buns, and salads. It turns out that the menu is new as of mid-2015, a change from the original authentic Tokyo-style ramen house from four years ago to more of a faster-food restaurant complete with a check-box menu. 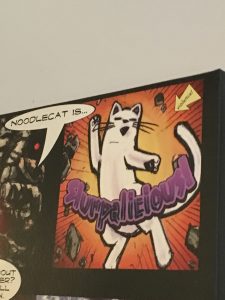 Jessica and Matt are Noodlecat pros, and they showed us the ropes in navigating the menu and placing an order. For starters, we ordered a hearty bowl of crispy Brussel sprouts and assorted buns to enjoy while we waited for the noodles (Figure 2). Both were a big hit. I especially liked the steam buns. Matt also ordered a kimchee salad, but it never came. Despite the overall lackadaisical attitude of the wait staff, the noodles did show up and generally did not disappoint. Steve and Matt ordered outside of their comfort zones and had the fiery dan dan (dry noodles) and double broth with added fire, respectively. Jessica and I stuck to the tried and true house ramen with pork miso (Figure 3). Mom was the outlier and ordered a rice bowl. 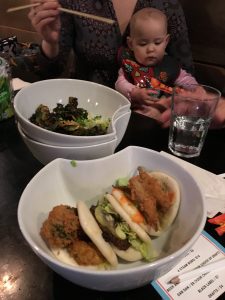 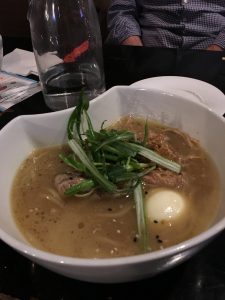 Matt wasted little time in finishing off his double bowl, and Jessica found herself busy alternating between enjoying her bowl and fending off Remy who insisted she was old enough to gnaw on a piece of noodle while threatening to stick the wooden chopsticks up her nose. Mom loves rice, so she was perfectly happy with her bowl. Steve went out on a limb and tried the dan dan, which, though he’s glad he did, he admits he would not try again. I found the regular portion of the house ramen to be huge, so I was in awe of Matt and his ability to put it away in a single setting. As described briefly in the menu, the house ramen is not as curly and chewy as traditional ramen. And, compared with the Flying Cranes Café, the pork miso definitely has a different flavor and pork preparation. Which is better? Of course, that depends on your personal preferences. As for us, we enjoyed our first Noodlecat experience, and we hope we don’t have to wait another year before all of us get together again for a slurp.

Update upon updates:  Crocker Park’s Noodlecat closed in early 2020.  Check The Greenhouse Tavern update for why…