What:  The Greenhouse Tavern

So, where do you take people for a meal you are eager to recruit to Cleveland? East 4th Street is a very good choice. This small vehicle-restricted district is home to over a dozen restaurants and many entertainment spots making it a popular destination for the night-on-the-town crowd. I am sure you will be reading several blog posts about restaurants from up and down this district in the near future.

This particular post is related to our visit to The Greenhouse Tavern in the summer of 2014. My colleague/friend Will Bush and I were anticipating the start of our positions at Case Western Reserve University, and we were in the midst of moving our labs to Cleveland. As part of this process, we invited our graduate students and post-doctoral fellows to visit Cleveland so they could decide whether or not to move physically to Cleveland with us. One of the graduate students (Will’s, I should say) is a bit of a gourmet, and she requested The Greenhouse Tavern for dinner. The hunk of beef prepared sous vide apparently caught her eye on the menu. Also, the chef is James Beard nominated, so how bad could this be?

When we arrived, I found there was plenty on the menu to catch anyone’s eye. Familiar menu items include crispy chicken wings and steamed clams, and fun menu items include the pork ramen and fancy poutine. For the more adventurous, there’s the pig head with barbecue sauce.

Most of us at the table ordered the four course menu, which is at a pretty reasonable price. Among the items ordered were the hay-scented poached egg omelet (Figure 1) and the beef vacuumed sealed in a butter sauce (prepared sous vide). Of note is the Fred Flintstone Beef Short Rib on the menu. When it arrived, it really looked like its menu name. Thank goodness two people ordered it to share. For drinks, we ordered beer and wine on tap (Figure 2). Now that’s classy! The Greenhouse Tavern also offers a cocktail on tap, for those interested.

Overall, we had a rich experience. I say rich because that beef in the butter sauce was really, really rich. We enjoyed our meals and I loved the wine selection on tap. I think once we fully digest our dinner and work off some of those calories, we’ll start planning our next visit back to this East 4th Street eatery. As for our recruitment efforts, yes, some of the graduate students moved to Cleveland with us. Good food and good science---what’s not to love about Cleveland? 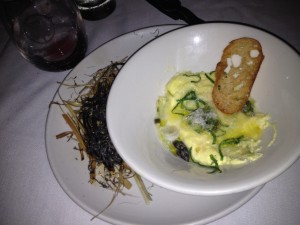 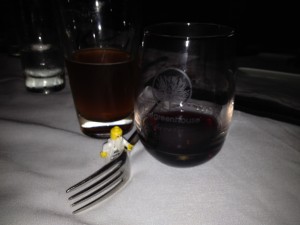 Figure 2. Everything is awesome! We found this Lego piece under our table cloth after we ordered beer and wine on tap.

Update:  The Greenhouse Tavern permanently closed February 16, 2020 (actually, it was February 9th after they ran out of food to serve).  This closure was one of many for Jonathon Sawyer, Cleveland-celebrated and James Beard-recognized chef.  As of this writing, all Sawyer restaurants in Cleveland have been closed, including the in-name-only Sawyer's in the new Van Aken district (it was so new, we never got a chance to go before it closed).  While Sawyer is still sorting out the financials he left behind here in Ohio, he's now off and running in Chicago.  Same mid-west region, different great lake, I suppose.