It’s Wednesday night in Cleveland, so you know what that means.  That’s right, it’s Opera Night at the Music Box Supper Club!  Actually, I don’t know if Opera Night is always on a Wednesday, but this particular night Mom and I caught it, and we were really happy that we did.

On this Opera Night, the Music Box Supper Club featured soprano Claire Connelly (Figure) and baritone Josh Watson.  As I have written before, the Music Box Supper Club is a venue in the flats area featuring live music and other entertaining events (like Will Bush at the Science Cafe!).  The venue also features food and drink.  For this Opera Night, Claire and Josh, along with their pianist (whose name I cannot find…), played selections from famous operas.  I am not an opera enthusiast, but I did recognize the music to many of the selections they featured.  Also, Claire and Josh did a great job introducing each piece and explaining the plots that led up the scene there were going to play.  These explanations made opera accessible to novices like myself.  Claire and Josh also did a great job with staging and interacting with the audience.

The pair closed the night with selections from American musicals that featured opera-like scores.  Some of these selections included pieces from Oklahoma!, Porgy and Bess, and, of course, Phantom of the Opera.  Mom and I absolutely loved it!

After the show, we chatted briefly with Claire about music in Cleveland.  She mentioned the Cleveland Institute for Music, which is in University Circle and very close to CWRU.  We’ll be sure to sign up for student performances since those are mere steps from where I work.  In the meantime, we’ll also be on the lookout for more Opera Night at the Music Box Supper Club! 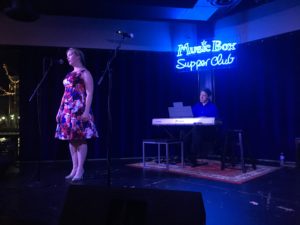 Figure. Claire Connelly, soprano, on Opera Night at the Music Box Supper Club. Yes, I see the piano player, but I forgot his name (sorry!).