I was listening to our local NPR affiliate WCPN this morning while getting ready for work, as one does, when I heard that a Cleveland-area restaurant and a chef were named as semi-finalists in this year’s James Beard Foundation Awards.  The chef in question is Jill Vedda of Salt+, who is up for the Best Chef Great Lakes award.  Salt+…hey—I’ve been there (Figure 1)! 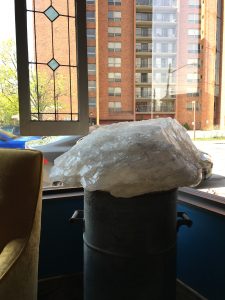 Before I get ahead of myself and fill this post with pictures, here’s a quick primer on the James Beard Foundation Awards.  The James Beard Foundation Awards are awarded annually to chefs, restaurants, authors, and journalists who, according to voting culinary professionals, make “America’s food culture more delicious, diverse, and sustainable for everyone.”  Only 23 restaurant and chef honors were awarded last year, so being named a semi-finalist in-of-itself is an honor

Often described as a foodie just based on the observation that I like to eat, you might have thought that I would be all over these awards given they are considered the Oscars of the food world.  Well, no, not really.  In fact, I wasn’t even vaguely aware of these awards until the 2014 American Society of Human Genetics held in San Diego.  I joined Dr. Melinda Aldrich and her crew for lunch and she, the true foodie, had a list of restaurants to try based on “best of” lists, including James Beard Foundation Awardees.  On this occasion, she noted that San Diego restaurants had yet to win a James Beard Foundation Award (ouch), so we opted for Prepkitchen, which was listed as critic’s pick 2014 for causal dining.  Damn–she is always so organized!

As for my unorganized self, I came upon Salt+ when my husband Steve suggested we try it because he heard they did small plates.  Steve loves small plates.  He loves them so much that sometimes he orders a bunch of starters at once thinking he’s doing small plates.  But, alas, they are not small plates–they are just starters that the server brings to us all at once.  Oh, where to start! 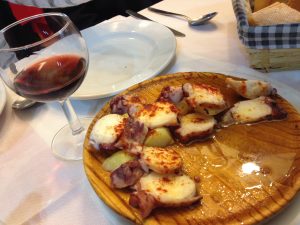 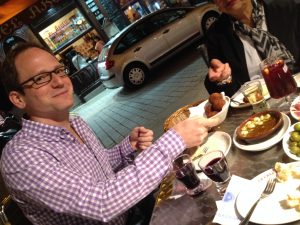 Well, for one thing, if you are not familiar with small plates, you need to try a Spanish tapas restaurant.  For those of you who find yourselves in Bethesda for NIH study section or a scientific meeting, you are probably familiar with the popular Jaleo.  They do small plates based on traditional Spanish tapas (gambas al ajillo, jamón ibérico, patatas bravas, etc.); that is, morsels of meat, fish, or potatoes served hot or cold, depending on the tapas (Figures 2-4).  And, of course there is wine.  An important feature of tapas is that you can order all at once or order incrementally.  The tapas are delivered to your table when they are ready, not all at once like the starters Steve wishes were tapas. 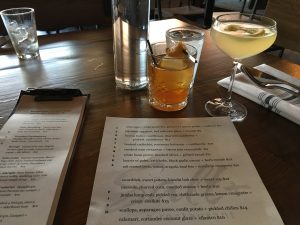 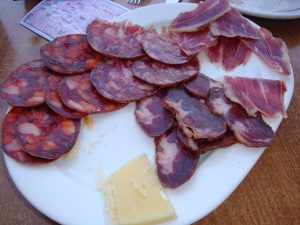 Not to confuse you, but Salt+ is not a Spanish restaurant.  Rather, it is described as offering “globally inspired small plates.”  I describe it as yum coupled with hand-crafted cocktails.

The menu changes seasonally at Salt+, so what we experienced is most likely not available now (Figure 5).  Still, it’s worth a trip down gastro-memory lane… 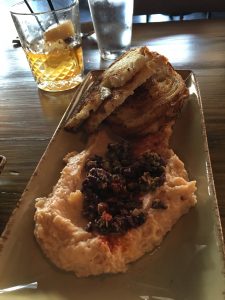 The menu is divided into vegetables, fish, and meat.  The cocktail menu at the time we dined consisted of drinks with names we recognized but couldn’t quite place.  The names turned out to be female movie leads of romantic comedies (Julia Gulia, anyone?).  We spent a good amount of time trying to figure out the whole list. 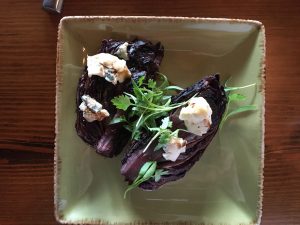 We tried a few plates from each section of the menu (Figures 6-9).  A little veggie, a little fish, and a little pork belly.  Everything was quite tasty and beautifully presented.  At the end of the meal, I ordered the port, again, as one does.  The server came back from the bar sans port and apologized profusely.  In lieu of my tawny, they gave us a flight of something similar (Madeira, I think? Figure 10) and a dessert for a discount.

We really enjoyed Salt+ and would frequent it more had it not been located in Lakewood.  Lakewood is on the west side (gasp!), a mere 7 miles or so from Cleveland proper.  We actually toured the city as a possible place to live but realized that the commute would be difficult, especially in the winter.  We chose to live on the east side where the commute to work is very easy but the small plates are scarce.  Luckily, the trade-off is bearable with award nominated, west side destination eateries such as Salt+. 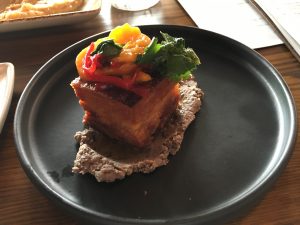 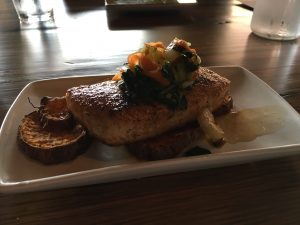 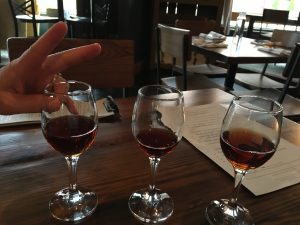