What: SASA and Shaker Square Cinemas

Back many moons ago, I attended the movies in a theater regularly. Summer nights were dictated by hotly anticipated movie premiers from my pre-teen through teenage years.   Early in my movie-going years, I was terrified of Imperial AT-AT Walkers and blood lusting cults; I knew who I was gonna call; I thought ewoks were cute; and I learned three important rules: 1) no bright light, 2) don't get him wet, and 3) never feed him after midnight. Later, I appreciated that no one puts baby in a corner; that if you build it, they will come; and the importance of wearing underwear during a police interrogation.

At some point along the way, I stopped seeing movies in a theater. Perhaps it’s the industry and the declining quality of original movies. I mean, who needs another re-boot of Superman (Reeves 1978!), Batman (Keaton 1989!), or Spiderman (McGuire 2002!) at this point? And don’t get me started about Mission Impossible or the re-numbering of the Star Wars movies. Perhaps it’s the evolution of streaming services available on TV and the computer. True, we stream a lot of content these days at home including movies. But, ultimately, I think it’s me, not you movie industry. I am just set in my home-bound ways these days unless lured out of the home with the promise of a fabulous meal. So imagine my surprise when Steve suggested we go to a movie. On a weeknight, no less.

Said movie was Disney Pixar’s Inside Out being shown at Shaker Square Cinemas. This movie had a lot going for it: 1) it stars Amy Poehler, one of my favorite actors and comedians and 2) the theater is only five minutes from our house. A major drawback:   no pre-movie dinner. My Prevention Research Center colleagues would shake their heads in shame if they knew what I ate that night….

Overall, I really, really enjoyed the movie. If you haven’t seen it, the movie centers on five emotions of a 11 year old girl moving across the country with her family.   The emotions include joy (Amy Poehler, of course), sadness (Phyllis Smith, best known for her role in American version of The Office), disgust (Mindy Kaling), fear (Bill Hader), and anger (Lewis Black). The casting was brilliant. Poehler and Smith deserve awards for this. Seriously. The story for me was also compelling. I, too, moved (in my case from the west to the south) when I was 10 years old, and I remember how this move also happened to coincide with a major transition from childhood to my pre-teen years. When you get through the poignant and often funny movie, watch for the post-credit scenes. The one involving cats is spot on (watch for disgust and fear!).

But this post is not just about going to a movie at Shaker Square Cinemas (which is a perfectly pleasant place to watch one, by the way). On our way out of the theater we noticed a window filled with bottles of sake. What’s this---a Japanese restaurant in our midst? Why haven’t we tried this place yet? Oh, we have to fix this situation! So, the following weekend, Mom, Steve, and I made our way to SASA for a try (Figure 1). 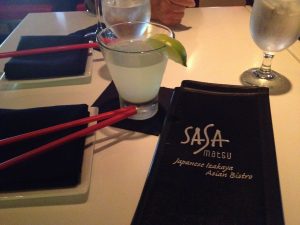 SASA has been around for approximately eight years and describes itself as a kind of Izakaya house (aka Japanese pub). We have been to an Izakaya house before in another state, but we have not been to one in Japan so we cannot vouch for SASA’s authenticity. We did notice that both Izakaya houses we have tried have an extensive menu of small plates, including sashimi and rolls (but sadly, no ramen). Small plates are perfect for us when we are in the mood to try many different things. On this particular night, I was really hungry, so we ordered fast and furious. We started with wasabi crab cakes (Figure 2), the shrimp shumai (Figure 3), and beef gyoza (Figure 4). Things got serious when the salt and pepper Norwegian mackerel (Figure 5) and salmon sashimi (Figure 6) showed up. By the time the oysters hit the table (Figure 7), we were officially stuffed for the night. The poor meatballs (Figure 8) had to be boxed up to be enjoyed for lunch the next day. 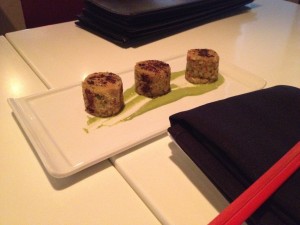 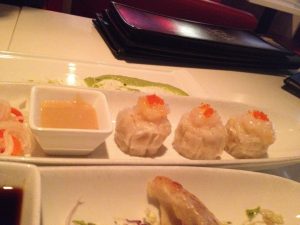 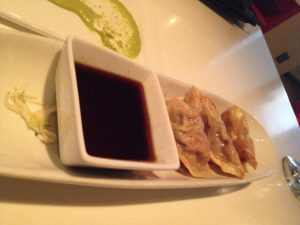 Figure 4. Kobe been gyoza. I love to order gyoza! 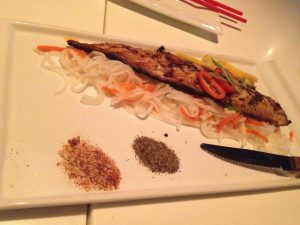 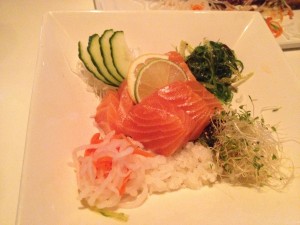 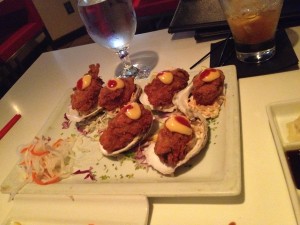 Figure 7. Oyster fry. Oh, what were we thinking? 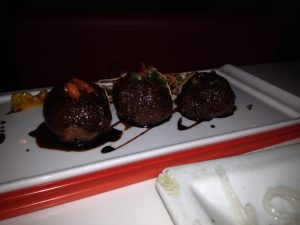 Figure 8. Kobe beef meatballs. We were officially stuffed. These meatballs made a good lunch the next day.

Overall, we found the food and drinks at SASA to be good, and the atmosphere to be pleasant. The indoor dining space is actually pretty large, and the restaurant has a small patio space in the front during good weather. Steve and I were really impressed with the fish and will probably forgo some of the other small plates for more fish and sashimi the next time we visit. Dinner and a movie, perhaps?