It’s April 1st, so you know what that means—the Garfield Memorial at Lake View Cemetery is open for the season!  No foolin’! 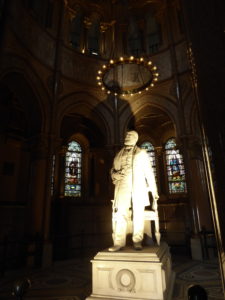 Figure 1. James A. Garfield, briefly the 20th president of the United States (in Carrara marble by Alexander Doyle).

Like most Americans, I know the first few presidents and the last few presidents, but the guys (sadly, still only guys so far) in the middle are a bit fuzzy.  Who was the 20th president of the United States?  Good question.

It turns out that it was Ohio’s own James A. Garfield (Figure 1).  Garfield was the last president to have been born in a log cabin (much like Lincoln—the president everyone can name!), was a Union general in the Civil War, and represented Ohio’s 19th District (the fighting 19th!) in congress for several years before elected president in 1880.  Despite all his accomplishments, one reason President Garfield is not more well known is that he was only in office for 200 days.  Garfield was shot by a would-be-assassin, and died months later from an infection most likely introduced by doctors’ unsanitary treatments to extract the assassin’s bullet.  “We might criticize the introduction of the finger” [J.C. Warren (1881) Boston Medical and Surgical Journal].  Indeed.  Garfield lay in state in Cleveland on September 25, 1881 and moved into the newly-built memorial on May 19, 1890. 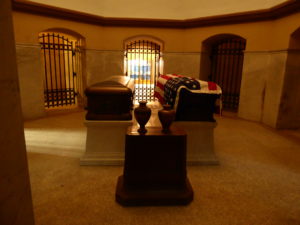 Figure 3. James and Lucretia Garfield at the Garfield Memorial. 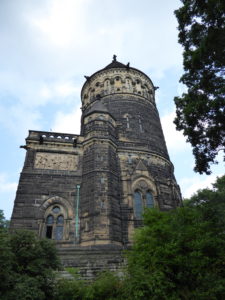 The Garfield Memorial is a popular tourist spot in Cleveland attracting both the causal and professional historians alike.  The Memorial also attracts those interested in architecture as the building itself combines Romanesque, Gothic and Byzantine styles (Figure 2).  On display are a marble statue of Garfield and a pair of caskets representing the President and his wife Lucretia (Figure 3).  Alongside the caskets are two urns of their only surviving daughter and her husband.  The Garfields had a total of seven children, but two died early in life, one of diphtheria and the other of whooping cough.  Death by dirty fingers and vaccine preventable diseases (PMC5402432)–nothing like early American history to make me grateful for living in 2018! 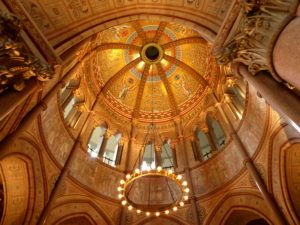 Figure 4. Be sure to look up to admire the Garfield Memorial dome. 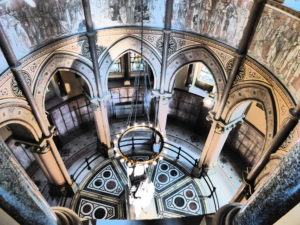 Figure 5. Don’t forget about the panels and stained-glass windows, too! (Garfield Memorial)

The Memorial has a beautiful dome, panels depicting Garfield’s life, and stained glass windows of the 13 original colonies plus Ohio (Figures 4 and 5).  The Memorial is staffed by someone who knows their Garfield stuff between 9am and 4pm from April 1st to November 19th.  If you would rather skip the historical stuff, run past the park volunteer and up the steps to the outside upper balcony where, on a clear day, you can see Lake Erie (Figure 6).

Figure 6. On a clear day, you can see Lake Erie from the upper balcony of the Garfield Memorial. This 2015 day was a bit hazy, so we’ll have to come back.

A lake view from the cemetery—that’s Lake View Cemetery.