A few weeks ago, Steve told me he saw a white large bird fly by our house.  What?  Gasp—a snowy owl?!?

I caught a few headlines earlier that snowy owls were in Cleveland this winter.  Snowy owls are arctic birds, so seeing more than one in Northeast Ohio is unusual.  Apparently, this year there’s a gaggle of them due to what is known as an irruption (that’s ecology speak for a sudden increase in an animal population).  Actually, gaggle is a term reserved for a bunch of geese.  The correct term for a gathering of the usual solitary owl is parliament.  Anyway, the cause of the irruption was an unusually large lemming population, which meant all the cute owl chicks that season had plenty to eat.  It also means that the CLE is in for a treat this winter!

My first chance to partake in this special birding mission happened to coincide with my sister’s visit.  My sister Cece and her husband Steve (yes, I know it’s confusing) have been living in New Zealand for nearly eight years now, so I knew she would be totally up for some wildlife viewing.  After briefing Cece on the snowy owl excitement, my Steve (yes, that’s how we tell them apart) mapped out the recent Cleveland sightings, and Cece found a website with an eBird email alert feature.  We grabbed the binoculars and the fancy camera, and out the door we went. 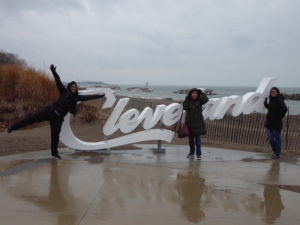 First stop:  Euclid Beach Park.  Snowy owls have been sighted sitting on posts near the water, and this Metropark has plenty of posts.  We left the dry, warm comfort of our car and ran around looking for something big and white.  Were there any by the beach (Figure 1)?  Nope.  How about the marina (Figure 2)?  Nope.  Hey, isn’t that a fellow birdwatcher complete with binoculars?  A quick exchange with the expert confirmed that no owls have been sighted there that day, but he gave us some tips for other likely places.  We piled back into the car and off we went. 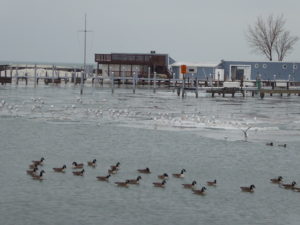 Figure 2. Nothing but seagulls and Canadian geese.

Next stop:  the pier lot near Voinovich Bicentennial Park.  We piled out of the car and shivered as we checked the posts for owls.  Nothing.  Cece checked eBird and noted that an owl in Lorain, OH was making the rounds.  But, nothing near us.  At this point, Mom was cold and wasn’t having any more of it until there was some hot soup.  And stat.

As luck would have it, we parked next to Nuevo Modern Mexican & Tequila Bar.  We have tried to dine here before in the summer when we were hosting family, but it was packed with more than an hour-long wait list.  On this blustery late afternoon, we walked right in for a quick bite knowing dinner was just a few hours away. 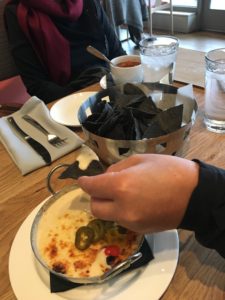 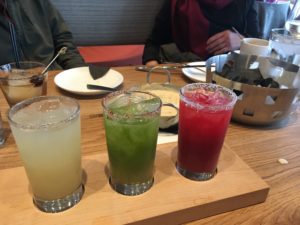 Figure 4. Margarita sampler: traditional, jalapeño cilantro, and cranberry. I’ll let you guess which one you should skip.

Mom, of course, ordered the soup of the day, which happened to be beef stew, an unexpected menu item for a Mexican restaurant.  Steve, Cece, and I just wanted a quick snack, so we chose the queso fundido (Figure 3).  We needed something to wash it down, so I ordered a margarita sampler (Figure 4).

All in all, we enjoyed our Tex-Mex detour nosh.  Nuevo Modern Mexican & Tequila Bar is by no means Mexican destination dining, but it was good enough to hit the spot on a cold Cleveland weekend afternoon.

After the impromptu nosh, we once again piled into the car searching for the elusive owls.  Whisky Island.  Wendy Park. Edgewater Park.  Nope, nope, nope.

We went to dinner and eventually home empty handed.  Cece took one last look at eBird, and wouldn’t you know it—an owl was spotted at Edgewater Park while were at dinner. 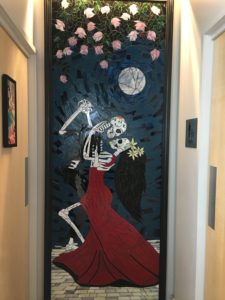 Figure 5. A snowy owl tango (a dance, by the way, that is from Argentina, not Mexico).